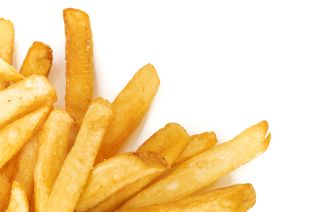 Update: McDonald's announced on Aug. 17 that it is removing the fitness trackers from Happy Meals after reports of potential skin irritations that may be associated with wearing the device, according to a statement from McDonald's provided to Live Science.

McDonald's is serving up something a little different with its Happy Meals: fitness trackers. But experts are split about whether this addition will make Happy Meals healthier for kids.

The tracker, which is essentially a pedometer, will temporarily replace toys in Happy Meals in the U.S. and Canada, Digital Trends reported today (Aug. 17). The wrist-worn devices will track steps and will blink according to how fast the user is moving, according to Digital Trends.

So, does getting kids to move more offset letting them eat french fries? [10 Ways to Promote Kids' Healthy Eating Habits]

Jennifer Harris, the director of marketing initiatives at the Rudd Center for Food Policy and Obesity at the University of Connecticut, said no.

Giving kids a fitness tracker isn't going to make up for the fact that they're eating a Happy Meal, Harris told Live Science. With this initiative, McDonald's is trying to make parents think that these meals are good for kids, Harris said.

This is not to say that the possibility of kids doing extra physical activity isn't a good thing. "Physical activity is great," Harris said. But it's not going to offset the extra calories, fat and sodium that are in McDonald's Happy Meals, she added.

Research has found that kids consume more calories on days when they eat fast food than on days when they do not, Harris said. And when it comes to maintaining a healthy weight, the amount of calories a person consumes is really important, she said.

But Katherine Tallmadge, a registered dietitian and an op-ed contributor to Live Science, viewed the addition of the fitness trackers in a different light. [The Best Pedometers and Step Counters]

"It's a great step forward," Tallmadge told Live Science. Giving kids a pedometer, no matter what they're eating, is a good idea because children are too sedentary, Tallmadge said. A fitness tracker may motivate them to engage in more physical activity, she said.

And although kids should not eat fast food every day, ordering a Happy Meal once a week isn't terrible, Tallmadge said.

People can get into trouble when they say that whole groups of food are bad, Tallmadge said. Saying that french fries are bad across the board, for example, is incorrect, she said. Potatoes are quite nutritious and they can be fried in a healthy oil, she said. Certainly, kids shouldn't eat them every day, but once or twice a week isn't a problem, she said.

Tallmadge also noted that, compared to other restaurants that feature burgers, a hamburger from McDonald's is smaller. McDonald's is often vilified, but the company is working on making improvements, and that's a good thing, she said.

And while it would be great if Happy Meals included a salad or grilled chicken sandwich as options, ordering a Happy Meal with a hamburger, fries, apple slices and a low-fat milk is not bad choice, she said.