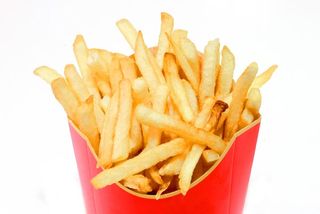 At fast food restaurants, most parents buy their children unhealthy items that can account for up to 51 percent of a child's daily calorie needs, even though healthier options are available, the study shows.
(Image: © Dreamstime)

Fast-food restaurants are serving healthier options, although only marginally so, according to a study published last week in the American Journal of Preventive Medicine.

You may have known that changes were afoot in the fast-food restaurants most vilified by doctors for serving unhealthy fare. McDonald's, Burger King and others now offer salad, fruit, and skim milk. The new offerings, advertised prominently, would make one think that a trip to the local burger joint is suddenly heart-healthy, and waistline-friendly.

Not quite, said Mary Hearst, director of public health at St. Catherine University in St. Paul, Minn., lead author on the report.

"The advertising of fast food restaurants has been emphasizing 'healthy' items, but there has been no data to support the claims," she told LiveScience.

The study found that the nutritional quality improved only somewhat between 1997 and 2010. Based on the Healthy Eating Index, a measure of diet quality that assesses conformance to federal diet guidelines, the overall health quality of fast food was poor, the researchers found.

Supersize those fries and diet Coke

So, yes, you now can get a side salad. But along with adding some greens, the restaurants also have added less healthful items — in terms of calories, fat, salt, sugar, and other measures — that have minimized any nutritional gains relative to the entire menu, the study found. The restaurants analyzed were McDonald's, Burger King, Wendy's, Taco Bell, Kentucky Fried Chicken (KFC), Arby's, Jack in the Box, and Dairy Queen.

Perhaps this comes to little surprise. After all, fast food is fast food. But Hearst emphasized that the study doesn't state that fast food restaurants need to alter their menu. At issue for the researchers, in part, are the health claims that fast-food restaurants make.

"If they are claiming healthy options, they should be able to demonstrate it," Hearst said. "If they seek a socially responsible mission, they should continue to improve the nutritional quality of their menus."

KFC made the greatest gains, from 42 to 51 points on the Healthy Eating Index, by increasing its offerings of vegetables and total grains while reducing saturated fat. McDonald's has improved the nutritional profile of its Happy Meals by adding apple slices and reducing the portion size of french fries; and it has gained six points, peaking at 48 on the Healthy Eating Index.

So, what's a health-conscious consumer to do for lunch aside from packing it? A salad at just about any fast-food chain might not be the answer. Analyses by the Physicians Committee for Responsible Medicine (PCRM) has found that most fast-food salads are not any more healthful than a greasy burger.

"You need to be creative" when eating at fast-food restaurants, said Ulka Agarwal, chief medical officer for the Washington, D.C.-based PCRM, a health-advocacy group that also conducts its own research.

Agarwal said to watch for unhealthy items in disguise, such as salads with bacon and fatty dressings pre-added. A salad bar can allow you to control food type and portion and steer toward largely plant-based items, she said. At Chipotle, one could order a burrito bowl with rice, beans, peppers, and onions and no sour cream. At Subway there are several low-fat, cholesterol-free sandwiches now.

But Agarwal added that sometimes, when trapped at airports or in a small city, there can be very few options.

Hearst said that the data they analyzed only reach to 2010, and that the positive trend they documented might have continued during the past three years.