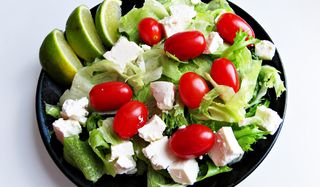 How many calories lurk within?
(Image: © Dreamstime)

As part of a new law, calorie listings are popping up on restaurant menus ranging from McDonalds to Starbucks to the Olive Garden.

But what if those calorie numbers were wrong?

In a new study of posted calorie counts, 19 percent of foods tested in a lab had at least 100 calories more than restaurants claimed on the menu. Many more foods were off by 10 or 50 calories.

"A hundred extra calories a day is not inconsequential," said nutrition researcher Susan Roberts, who led the study. "It really adds up." In fact, it adds up to about ten pounds of extra weight a year.

Soups, salads and sides ranked among the worst offenders of items that contained more calories than stated, the study showed.

The study will be published tomorrow (July 20) in the Journal of the American Medical Association.

In 2008, Roberts was writing a book based on the latest nutrition science, which presented two diet plans: one for those who cook most of their own meals, and one for those who eat out regularly. To test her diets, Roberts followed each plan and tracked her weight. On her home-cooking plan, she easily lost weight. But on her thoroughly researched restaurant plan, Roberts' weight didn't budge .

Roberts had based the plan on calorie numbers supplied by the restaurants, so she suspected those numbers were wrong. The experience inspired her to study the accuracy of those calorie counts.

Roberts and her colleagues at the USDA Human Nutrition Research Center on Aging at Tufts University randomly selected 42 restaurants in Massachusetts, Arkansas and Indiana, and four items from each menu: two items that claimed to have fewer than 600 calories, and two items with more than 600. The researchers shipped the food to a lab that could precisely measure its calorie content.

They found that many low-calorie items contained more calories than were posted, and many high-calorie foods had fewer.

A side order of extra calories?

The true calorie counts of some restaurant items were actually double — or even triple — the count the restaurant had listed. A zuppa toscana soup from Olive Garden was said to contain 191 calories, but the researchers measured 391. Outback Steakhouse claims their classic blue cheese wedge side salad has 376 calories, but the lab results showed it had a whopping 1,035. On the Border Mexican Grill and Cantina says that an order of chips and salsa has 451 calories. The researchers tested the chips' caloric content three times, and measured than 1,000 calories in each instance.

Some foods, however, had fewer calories than the restaurants claimed. A Sonic cheeseburger with mayonnaise and jalapeños is listed as containing 799 calories. But the burger ordered by the researchers had only 614. Lemon pepper shrimp from P.F. Chang's contained only 264 calories, instead of the 583 on the menu.

Linda Van Horn, a professor of preventive medicine at Northwestern University Feinberg School of Medicine, said this study came at an apt time, as it's becoming mandatory for restaurants with more than 20 locations within their franchise to post their calories.

"This study really is shining a spotlight on the need for accuracy and truth in labeling," Van Horn said.

Sit-down restaurants fared worse than fast-food establishments when it came to sticking close to stated calories, and this wasn't surprising, Van Horn said. "One of the hallmarks of the fast-food service is preprocessing. Everything is processed in exactly the same way, and frozen, and portion controlled. Whereas there's much more creativity and license to embellish recipes in a sit-down restaurant."

But the takeaway message shouldn't be which food items and restaurants were closest to their listed calories, Roberts said. The important thing is that many foods are being labeled inaccurately.

"It's really astonishing," Roberts told MyHealthNewsDaily. "For packaged foods in the supermarket, there's a policy on how accurate the calories must be. But there are no federal guidelines for restaurants."

So what's Roberts' new weight-loss advice?  "Well, to eat at home as much as possible," she said. "And what I tell my dieters is that if you're eating out, a salad is still a great choice, as long as you ask for no cheese and the dressing on the side." The variability in how much cheese or salad dressing is tossed onto a salad without measuring is likely one way that foods stray from their stated calorie content, she said.

Pass it on: When eating some restaurant foods — especially sides, soups and salads — you might be getting more calories than you think.