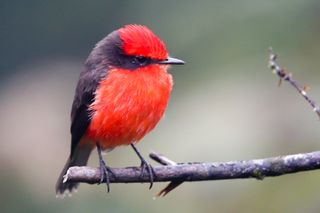 A newly discovered species of brilliant red songbird has almost certainly already vanished from its home in the Galápagos Islands, in what is the first known songbird extinction on the island chain in modern times.

Using genetic techniques, researchers recently learned that the Galápagos vermilion flycatcher was once at least two species: Pyrocephalus nanus, which is still found across most of the island chain, and Pyrocephalus dubius, which hasn't been seen since 1987 but used to live only on San Cristóbal Island. That island lends the extinct bird its common name, the San Cristóbal Island vermilion flycatcher.

"Maybe this is a call to arms so we can figure out what the problem is on the other islands," Dumbacher told Live Science.

The instigator of the research was Alvaro Jaramillo, a senior biologist at the San Francisco Bay Bird Observatory and a birder who sometimes leads tours to the Galápagos. He'd noticeddifferences in the vermilion flycatcher populations on the islands, as well as the disappearance of the birds from San Cristóbal Island. But scientists still lumped all of the Galápagos birds into the same species.

The Cal Academy has the largest collection of Galápagos songbirds in the world, including vermilion flycatchers caught on an expedition in 1905 and 1906.

"Every specimen that's in the collection is not only an example of that species, but also that time and place," Dumbacher said. Previously, researchers sampled the bodies of the birds in the collection to date the arrival of avian pox on the islands (around 1900, probably carried by someone's pet canary).

By genetically sampling the DNA from the toe pads of the birds, the researchers were able to discover a new species, years after its extinction.

What was perhaps most surprising to the team was that the Galápagos birds descended from a common ancestor nearly as old as the common ancestor of vermilion flycatcher species back on the Ecuadorian mainland. The researchers had expected to find that the island birds descended from the mainland birds; instead, they found the two populations to be sister groups, Dumbacher said.

The San Cristóbal Island vermilion flycatcher and the Galápagos vermilion flycatcher also show subtle differences in size, coloration and song, Dumbacher said. Though no one has looked systematically for the San Cristóbal bird for many years, rumors of its extinction are probably true, he said — the island is populated and developed, and there are many invasive species, like rats, that threaten native bird populations.

Another threat to Galápagos birds is Philornis downsi, an introduced parasitic fly that hatches in bird nests and sucks the blood of nestlings, killing them. Avian pox or avian malaria may also have contributed to the loss of the San Cristóbal Island vermilion flycatcher.

"We may never know exactly what it was that wiped them out," Dumbacher said. But the discovery, published online in May in the journal Molecular Phylogenetics and Evolution, could spur a new interest in Galápagos songbird conservation, he said.

"Maybe that's the silver lining in this story, that there are other populations that can still be saved," Dumbacher said.