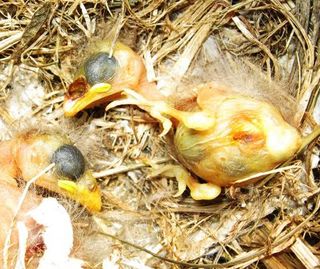 Two baby medium ground finches (Geospize fortis) lay dead in their nest, killed by the larvae of the fly Philornis downsi. Bloody nostrils, seen in the bird at right, are the calling card of the larvae, which crawl into the nostrils to feed.
(Image: © P. Lahuatte)

Maggots raised on chicken blood may help researchers figure out how to save endangered finches.

It's not Halloween yet, but a spooky new study is the first to report the successful rearing of the maggots of the fly Philornis downsi without a living avian host. That's good news, because P. downsi feeds on nestlings on the Galapagos Islands and is endangering several rare species. Rearing the flies in the lab is the first step in pest control.

The fly is not a native of the Galapagos, the diverse archipelago where Charles Darwin made his name. It was accidentally introduced there sometime before 1997, when its presence was first confirmed in bird nests on the islands, according to the Galapagos Conservancy, which helped fund the current research.

The flies lay their eggs alongside the eggs of nesting birds. The larvae then hatch and make their way to the nostrils of baby birds, where they feed on their blood. Older larvae hide in the nest, but return to the hatchlings at night like squirmy vampires. They're so voracious, according to the Galapagos Conservancy, that they often kill off entire clutches of baby birds via blood loss. [See Photos of Zombie Ants Controlled by Parasites]

Among the species threatened by the invasive fly are the mangrove finch (Camarhynchus heliobates) and the Floreana mockingbird (Mimus trifasciatus), both of which are critically endangered.

Researchers hope to use an eradication method called the sterile insect technique (SIT) to save these birds. First developed to eradicate the screwworm, a livestock parasite, this method involves releasing huge numbers of sterilized males into the wild. Females mate with these males but don't produce offspring, causing each successive generation of flies to shrink.

To use the sterile insect technique, though, scientists have to be able to raise a lot of larvae in the lab. That's why the new research, published today (Aug. 4) in the Journal of Insect Science, is a step forward. P. downsi flies reared on chicken blood could be irradiated to cause sterility and then released on the Galapagos Islands, crippling the fly population and giving land birds a much-needed boost.