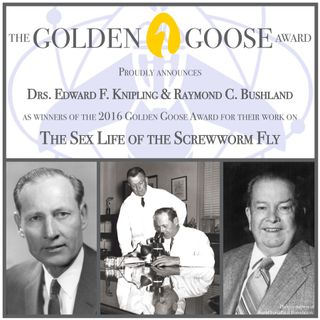 The sex life of a fly whose name translates to "man-eater" has netted two researchers a posthumous award from U.S. politicians.

The 2016 Golden Goose Award, which honors basic research that might seem silly but led to important breakthroughs, will go to Edward F. Knipling and Raymond C. Bushland. The U.S. Department of Agriculture funded the researchers' study of the reproductive behavior of screwworm flies (Cochliomyia hominivorax), a parasitic species that caused major problems for farmers and ranchers before Knipling and Bushland's work led to a new type of insect control in the 1950s.

"Given the recent rise of infectious diseases like the Zika virus, developing eradication programs for carrier pests is a much-needed field of scientific research," Rep. Randy Hultgren, R-Ill., a supporter of the Golden Goose Award, said in a statement. "Even though 'worms' might make some members of Congress —- as well as the public — a little squeamish or skeptical of the research we invest in, these studies by Drs. Edward F. Knipling and Raymond C. Bushland have clearly paid off." [6 Politicians Who Got the Science Wrong]

Adult screwworm flies look like large houseflies with orange heads. It's their young, however, that do the real damage. Female flies lay their eggs in scratches or cuts on the hides of livestock or other animals. The maggots, or larvae, of the screwworm fly burrow into the wounds, feeding on both the dead and living flesh of the infected animal.

"Untreated screwworm infestations can be fatal," reads a fact sheet on the insect put out by the Texas A&M AgriLife Extension. "The larvae will continue to feed on the animal and will eventually eat the host alive."

Even creepier, the maggots can infect humans, too. In 2008, an emergency-room doctor won a photo competition held by the journal Pediatric Emergency Care with a gruesome picture and case study of a 12-year-old girl who returned from a trip to Colombia with painful blisters on her scalp. A "blunt haircut" revealed the squirming larvae of the screwworm fly burrowed into the girl's skin. In total, doctors removed 142 larvae from her head. [Giant List of the Strangest Medical Cases Reported by Live Science]

Knipling and Bushland's research made such infections — for humans and for livestock — much less common. The two worked in Texas and Florida through the 1940s and 1950s to understand the fly's biology and behavior, according to the World Food Prize organization, which honored Knipling and Bushland in 1992. (The pair also have a USDA insect research laboratory in Texas named after them.)

With annual meat and dairy losses to screwworm flies totaling more than $200 million a year in the 1950s, Knipling and Bushland became focused on disrupting the natural life cycle of the flies, according to their World Food Prize biography. They reasoned that if they could release enough sterile male flies into the wild, mating would result in fewer and fewer offspring, eradicating the fly population. The researchers then figured out that they could treat the flies with doses of radiation calibrated to render them sterile but healthy enough to mate.

The first test came on Sanibel Island, Florida, in the early 1950s. It worked. The researchers named their method the "sterile insect technique." According to the USDA, the sterile insect technique eradicated the screwworm fly in the U.S. in 1966. Mexico, Belize, Guatemala, El Salvador, Honduras and Nicaragua have been screwworm-free since the 1990s.

"Screwworm research may sound like a joke, but it isn't. It saved the livestock industry billions," Rep. Jim Cooper, D-Tenn., who invented the Golden Goose Award, said in the statement. Scientists are now looking to transfer the sterile insect technique to Aedes mosquitos, the species that transfers the Zika virus. For example, the International Atomic Energy Agency announced in March that it was granting 2.3 million euros ($2.6 million) to researchers applying the technique to Zika-carrying mosquitos.