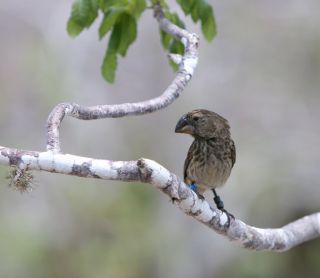 Darwin's finches helped show how the species adpated from generation to generation.
(Image: © B. Rosemary Grant)

People refer to "Darwin's finches" from time to time as a symbol of evolution in the Galapagos Islands, but the father of evolutionary theory actually dropped the ball on those birds, collecting better details on mockingbirds, tortoises and other species.

Charles Darwin's observations, notes and collected organisms from the Galapagos Islands during his 5-year voyage on the Beagle resulted in his theory of evolution by natural selection, one of the best substantiated theories in the history of science.

But Darwin failed to note which islands each particular finch came from. He tried to make up for the deficit by borrowing some finch notes taken by the Beagle's Captain Robert FitzRoy, but Darwin hardly mentioned the finches in his later writing.

Upon Darwin's return to London, experts informed him that many of the specimens he had thought included different birds were all finches that looked different from one another.

Nonetheless, this variation helped Darwin arrive at his understanding that the finches and other birds had adapted to the islands and specific environments where they live, leading to the theory that species are not fixed and unchanging; instead, they evolve over time from common ancestors.

The moniker "Darwin's finches" was popularized in 1947 as a tribute to Darwin by ornithologist David Lack, who published the first modern biological study of the finches, according to Robert Rothman of the Rochester Institute of Technology.

In the past few decades, biologists Peter and Rosemary Grant of Princeton University have studied finch populations and showed that the average beak sizes of successive generations changed to adapt to new food sources on Daphne Major, an island in the Galapagos.