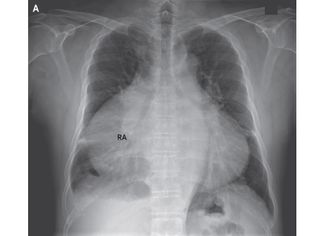 This image shows the patient's chest. The heart is lighter-grey mass seen in the middle of the chest, against the darker-grey background of the lungs. The right atrium of the heart is labeled "RA."
(Image: © The New England Journal of Medicine © 2016)

A 57-year-old man who went to the emergency room for swelling of his extremities learned that his symptoms had an unusual cause: a massively enlarged chamber of his heart, according to a brief report his case.

Imaging tests revealed that the man had what his doctors described as a "giant right atrium," according to the report, published Aug. 10 in the New England Journal of Medicine. The right atrium is one of the four chambers of the heart.

Because of the enlarged chamber, the man had a "cardiothoracic ratio" of 0.82, according to the report. [Here's a Giant List of the Strangest Medical Cases We've Covered]

The cardiothoracic ratio is a ration of the width of the heart is compared to the width of the chest, said Dr. David Majdalany, a cardiologist and director of the adult congenital heart disease center at the Cleveland Clinic in Ohio, who was not involved with the man's case. In other words, this man's heart was occupying 82 percent of the width in his chest cavity. A normal cardiothoracic ratio is less than 0.5, meaning that the heart takes less than 50 percent of the width in the chest, Majdalany added.

In the man's case, the doctors suspected that he was born with the condition. However, certain heart problems can also lead to an enlarged right atrium, Majdalany told Live Science. For example, conditions that cause too much blood to flow into the right atrium may lead to enlargement, he said. This is because the chamber needs to make more space to accommodate that extra volume of blood, he said. High pressure in the right chambers of the heart can also lead to right atrial enlargement, he said.

Problems with the valves in the heart (such as a leaky or narrow tricuspid or pulmonary valve), a hole between chambers of the heart, or abnormal vessels draining into the right atrium can cause too much blood to flow into the right atrium and increase the pressure within it, or the chamber size, Majdalany said.

But when the right atrium is enlarged with high pressure, blood doesn't return efficiently to the heart, which can cause pooling and swelling in the lower extremities, as the man in the case experienced. This slowdown in blood flow is what can cause swelling in other parts of the body, as the man in the case experienced. Because the right atrium receives the blood from the rest of the body, a problem with it can decrease blood flow in the vessels that lead to the atrium, including the veins in a person's legs, Majdalany said. Poor blood flow in the legs can result in swelling, he said.

Another problem that arises from slowed blood flow is the risk of clots, Majdalany said. When blood is not moving along, it's more likely to clot, he said. These clots can form in the legs or the right atrium and travel to the lungs, or if there is a hole between the two atria, to the brain and cause a stroke, he added.

There are different approaches to treating a person with an enlarged right atrium, Majdalany said. The treatment depends in part on whether the patient has symptoms, and in part on what caused the condition in the first place. For example, if the condition is caused by a problem with a valve or excess blood flow into the right atrium, surgeons may repair the valve or re-route the blood flow, Majdalany said. If the condition is caused by a problem with the heart's rhythm, a procedure called "ablation" may be used to correct the rhythm, he said. And in some cases, surgeons can operate to reduce the size of the atrium, he said.

In the man's case, the doctors who treated him did not perform any surgeries, they wrote in their report. The man was given anticoagulants to prevent blood clots and his condition has not gotten any worse in the past year, according to the report.