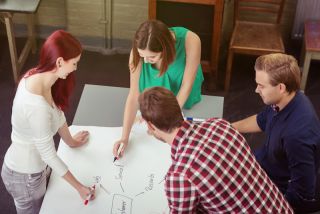 Although war, terrorism, and presidential elections may disguise the fact, humans are social beings, an evolutionary trait that helped separate us from other primates millions of years ago and led to our mostly chatty and cooperative ways.

These genetic underpinnings of human sociability, however, have remained a mystery. But in a study appearing today (Aug. 10) in the journal Nature, researchers report they have narrowed in on some of the genes responsible for social behavior by studying people who have Williams syndrome, a rare genetic disorder that makes them hyper-sociable.

Williams syndrome is caused by a deletion of a specific set of 25 contiguous genes on chromosome 7. The disorder affects about 1 in 10,000 people worldwide, and about 20,000 Americans currently have the condition, according to the Williams Syndrome Association, a patient-advocacy group.

People with Williams syndrome tend to crave social interactions. They can be overly trusting and drawn to strangers and often maintain an intense focus on a person's eyes during interactions. They also tend to possess below-average height, weight and IQ compared with the general population and are prone to heart defects.

In the new study, researchers at University of California, San Diego and at the Salk Institute for Biological Studies in neighboring La Jolla, California, investigated the genes associated with Williams syndrome to study the underlying neurobiology of the human social brain. [6 Foods That Are Good For Your Brain]

"I was fascinated on how a genetic defect — a tiny deletion in one of our chromosomes, could make us friendlier, more empathetic and more able to embrace our differences," said the study's co-senior author, Alysson Muotri, an associate professor of pediatrics and cellular and molecular medicine at UC San Diego School of Medicine.

In previous work, Muortri and his colleagues studied autism, which some doctors describe as being the opposite of Williams syndrome (people with autism tend to have great difficulty with social skills). By growing neurons from cells that were taken from the baby teeth of children with autism, a program called the Tooth Fairy Project, Muortri's group discovered an important gene associated with autism.

In the new study, Muortri took the same approach for Williams syndrome, harvesting cells from the lost teeth of children with this disorder. Using a technique called induced pluripotent stem cell (iPSC) reprogramming, the researchers turned the tooth cells into nerve cells, or neurons. They quickly noticed how different these neurons were compared to those from people without Williams syndrome.

First, the researchers found that many of the neural progenitor cells — cells that are to develop into neurons — failed to grow in the lab. This rampant cell death would explain the reduced cortex surface area in the brains of people with Williams syndrome. Muortri's colleagues, led by Eric Halgren, a professor of Neuroscience at UC San Diego, confirmed this finding using MRI scans of live study participants.

Next, the researchers found that some of the neurons that did flourish had more extensive tree-like branching than ordinary neurons, enhancing their connections with other neurons and possibly explaining the gregarious nature of people with Williams syndrome, Muotri said. They could confirm this finding, too, from brain tissue from a deceased person with the disorder.

"Why this [enhanced connectivity] is related to sociability and not intelligence [or] memory or any other benefit is still a mystery," Muotri told Live Science. "I speculate that this is because this seems to be restricted to a specific type of neuron related to the social aspect." [Top 10 Mysteries of the Mind]

The researchers wrote that their "brain-in-a-dish" cellular model of Williams syndrome could also be used to help better understand a variety of brain disorders, as well as the basis of human social behavior. The genes deleted in people with Williams syndrome, for example, appear to keep sociability from being too excessive.

Specifically, the researchers postulated that the gene named FZD9, missing in most people with Williams syndrome, helps to regulate cell death and neural branching.

"This is the first study to narrow down to FZD9 and to dissect the molecular and cellular mechanisms associate with this gene and the behavior phenotype," Muotri said. "This was only possible because we now have human iPSC that can be coaxed to recapitulate human neural development in a dish."

Because the human brain is so different from the brains of mice or other animals commonly studied in the lab, the group said their "brain-in-a-dish" model may serve as a better platform for studying human brain function than animal models.