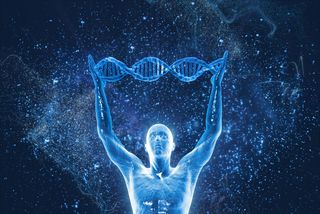 The news that researchers want to create human-animal chimeras has generated controversy recently and may conjure up ideas about Frankenstein-ish experiments. But chimeras aren't always man-made — and there are a number of examples of human chimeras that already exist.

A chimera is essentially a single organism that's made up of cells from two or more "individuals" — that is, it contains two sets of DNA, with the code to make two separate organisms.

One way chimeras can happen naturally in humans is that a fetus can absorb its twin. This can occur with fraternal twins, if one embryo dies very early in pregnancy and some of its cells are "absorbed" by the other twin. The remaining fetus will have two sets of cells: its own original set, plus the one from its twin. [Seeing Double: 8 Fascinating Facts About Twins]

These individuals often don't know they are chimeras. For example, in 2002, news outlets reported the story of a woman named Karen Keegan, who needed a kidney transplant and underwent genetic testing along with her family, to see if a family member could donate one to her. But the tests suggested that genetically, Keegan could not be the mother of her sons. The mystery was solved when doctors discovered that Keegan was a chimera — the set of DNA in her blood cells was different from that in the other tissues in her body.

A person can also be a chimera if he or she undergoes a bone marrow transplant. During such transplants — which can be used, for example, to treat leukemia — a person will have his or her own bone marrow destroyed and replaced with bone marrow from another person. Bone marrow contains stem cells that develop into red blood cells. This means that, for the rest of his or her life, a person with a bone marrow transplant will have blood cells that are genetically identical to those of the donor, and are not genetically the same as the other cells in the recipient's own body.

In some cases, all of the blood cells in a person who received a bone marrow transplant will match the DNA of the donor. But in other cases, recipients may have a mix of both their own blood cells and donor ones, according to a 2004 review paper in the journal Bone Marrow Transplantation. A blood transfusion will also temporarily give a person cells from someone else, but in a bone marrow transplant, the new blood cells are permanent, according to the Tech Museum of Innovation in San Jose, California.

More commonly, people may exhibit so-called microchimerism — when a small fraction of their cells are from someone else. This can happen when a woman becomes pregnant and a small number of cells from the fetus migrate into her blood and travel to different organs.

A 2015 study suggested that this happens in almost all pregnant women, at least temporarily. The researchers tested tissue samples from the kidneys, livers, spleens, lungs, hearts and brains of 26 women who died while pregnant or within one month of giving birth. The study found that the women had fetal cells in all of these tissues. The researchers knew that the cells were from the fetus, and not from the mother, because the cells contained a Y chromosome (found only in males) and all of the women had been carrying sons.

In some cases, fetal cells may stay in a woman's body for years. In a 2012 study, researchers analyzed the brains of 59 women ages 32 to 101, after the women had died. They found that 63 percent of these women had traces of male DNA from fetal cells in their brains. The oldest woman to have fetal cells in her brain was 94 years old, suggesting that these cells can sometimes stay in the body for a lifetime.