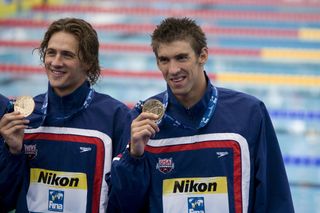 From the decade-long swimming rivalry between Michael Phelps and Ryan Lochte, to figure skating's famous Nancy-Kerrigan-versus-Tonya-Harding contest, some Olympic matchups seem to be as much about contention between two personalities as they are about crowning a champion.

For elite athletes, facing tough competition comes with the territory, and the closer they get to the tops of their fields, the fiercer their competitors get.

At the Olympics, the stakes are higher, the audience is bigger and every contest is scrutinized down to the smallest detail. Competition can get personal, and rivalries — between countries or individuals — take center stage. [Going for Gold! 7 Olympic Secrets to Success]

At first, a rivalry might seem like a good thing, capable of motivating both competitors to try even harder to win, experts told Live Science. But rivalries can also go sour, nudging attention away from athletics and toward interpersonal drama, these experts said.

Top athletes typically don't play favorites; they want to beat everybody, said Daniel Gould, a professor of applied sports psychology at Michigan State University. But repeated physical proximity to opponents can certainly plant the seed for a rivalry to grow, he added.

For example, at the high school or college level, rivalries tend to form between teams or individuals in neighboring cities, who regularly face each other on the field, Gould told Live Science. As rivalries continue over time, "they can take on a life of their own," becoming an intrinsic part of both teams' shared history, he said.

Some rivalries get personal. Remarks by one rival that are perceived as disrespectful to the other can fan a rivalry's flames, even if the offense was unintentional or the words were taken out of context, Gould noted.

Certain sports may also be more likely than others to spawn rivalries, said Richard Keegan, an assistant professor in sport and exercise psychology at the University of Canberra in Australia.

"Some sports only meet infrequently, so there is less opportunity for rivalries to build," Keegan told Live Science in an email. Olympic boxers, for example, may have never confronted each other before. But in tennis, players face each other frequently, and rivalries are far more likely to take hold, he said.

And in sports where athletes perform individually, such as diving or gymnastics, rivalries might take longer to develop than in sports when athletes compete at the same time, Keegan added. [2016 Olympics: Visit Rio with 360-Degree Videos and Virtual Reality]

Clash of the titans

Rivalries can also be bigger than any one athlete, and even any one team. During the Olympic Games, entire countries fiercely compete to take home the most gold medals; in recent years, China and the United States have emerged as closely matched for top positions.

But from the 1960s through the 1980s, it was the U.S. and the Soviet Union (USSR) — then the world's biggest superpowers — that competed in the Space Race, the Arms Race and the race for Olympic gold.

Countries are meant to temporarily shelve political differences during the Olympics, but tense relationships between nations can nonetheless spill over into the sporting world. In the case of the U.S. and the USSR, decades of mistrust and barely veiled antagonism influenced American and Soviet Union spectators' emotions when their Olympic athletes went head to head, said Jay Coakley, a professor emeritus of sociology at the University of Colorado, Colorado Springs.

"People perceive a rivalry in connection with their sense of the larger social and political issues between their nation and the nation represented by opposing athletes," Coakley told Live Science in an email.

"The greater the perceived threat of that nation to their collective values and well-being, the greater the rivalry will be," Coakley said.

Head in the game

But might there be some benefit to rivalries, perhaps motivating athletes to perform better? That depends on the athlete, Gould told Live Science.

"Sometimes, a rivalry will pump you up a little more, get the excitement and the buzz going," he said. But "if you think about it too much, and you get off your game, it can hurt you."

"They can be a huge distraction and lead to focusing on the opponent more than the game or task," and they can make losing even harder, he told Live Science. Rivalries have led to unsportsmanlike behavior, such as the infamous 1994 attack on American skater Nancy Kerrigan that her longtime rival Tonya Harding planned.

Top athletes have a well-defined pre-game routine, physical and mental, that they follow to reduce anxiety and prepare to compete, Gould said. An important part of that preparation is blocking out distractions, including rivalries.

"The better athletes don't get psyched up for a rivalry — they try to treat every competition the same," Gould said.

On the other hand, rivalries can indeed provide motivation that athletes need during the hard months and years of training leading up to the Olympics, he added.

People watching the Olympics "don't see athletes waking up at 5 in the morning, 18 months ago, to lift weights," Gould said. "If you think about what it's like to lose to your rival, sometimes that's what it takes to get you out of bed."