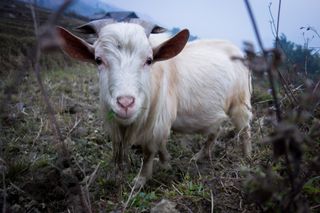 Goats try to catch our eyes when they need help.
(Image: © alexmontjohn/Flickr)

Could your next pet be a goat? New research suggests that these farm animals try to communicate with people in the same way that dogs and horses do.

In a series of experiments, researchers found that when the animals had a problem that they couldn't solve alone, the goats would gaze at a person for help. The research, published this week (July 5) in the journal Biology Letters, also showed that goats will change their actions in accordance with a person's behavior.

Goats were the first domesticated livestock species, about 10,000 years ago, according to lead author Alan McElligott of Queen Mary, University of London. [See Photos of Heritage Livestock Vanishing Across the US]

"From our earlier research, we already know that goats are smarter than their reputation suggests, but these results show how they can communicate and interact with their human handlers even though they were not domesticated as pets or working animals," McElligott said in a statement.

To test the goats' communication skills, the researchers trained the animals to remove a lid from a box to receive a reward. The reward was then made inaccessible, and the goats' reactions toward the experimenters — who were either facing the goats or had their backs turned away — were recorded.

"Goats gaze at humans in the same way as dogs do when asking for a treat that is out of reach, for example," study researcher Christian Nawroth, also of Queen Mary, said in the same statement. "Our results provide strong evidence for complex communication directed at humans in a species that was domesticated primarily for agricultural production, and show similarities with animals bred to become pets or working animals, such as dogs and horses."

The authors said that they hope the study will help people to better understand the ability to learn that domesticated animals like goats, dogs and horses possess, and how that affects their interactions with humans. By learning more about what drives the animals' relationships with humans, the researchers said that those working with animals might be able to make overall improvements in the animals' welfare.