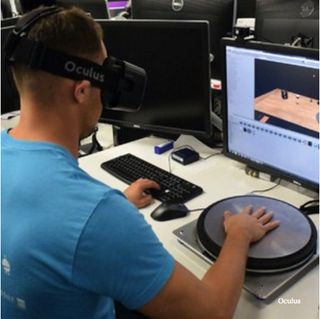 The HapticWave transmits vibrations that are synced with the virtual world displayed in an Oculus Rift headset.
(Image: © Oculus)

Haptics are a happening area in virtual reality these days. The term refers to devices and technologies that produce tactile sensations to go along with all those immersive visuals and sounds.

The makers of the Oculus Rift, along with parent company Facebook, are working on a potential haptic add-on to their virtual reality headset. It's called HapticWave, and it's kind of like a omnidirectional virtual reality glove, without the glove. I swear — write about this stuff long enough and everything starts to sound like a Zen koan.

According to an interesting report over at MIT Technology Review, the HapticWave device consists of a circular metal plate set atop a ring of electromagnet actuators. Put your hand in the center of the disc and the device transmits vibrations that are synced up with what you're seeing and hearing through the Oculus Rift headset.

Unlike existing haptic gloves or other tactile tech strategies, the electromagnetic actuator approach can simulate vibrations coming in from specific directions. So, for instance, you could feel the approach of a bouncing ball coming toward you on a tabletop.

Additional sensors in the disc detect the placement and movement of your hand, then send that info back to the actuators for further adjustment. The frequency of the vibrations can be shifted to suggest heavier or lighter virtual objects interacting in virtual space.

RELATED: Get Handsy with Haptic Tech

It might seem like there's little practical use for such a device, aside from ping-pong spectator simulators. But the designers are noodling around with game design concepts in which your hand become a kind of tactile stand-in for the rest of your body. Let's say a post-apocalyptic super mutant is sneaking up from behind. You could actually feel the footfalls at the base of your palm.

From a certain perspective, it's actually an interesting way to flip the script on input devices. Instead of using our hands to send input to the machine, via a controller, the machine sends input to us, via our hands. Trippy. Let the Singularity begin.

Demos of the HapticWave system will be rolled out at the upcoming Siggraph conference in California later this month.