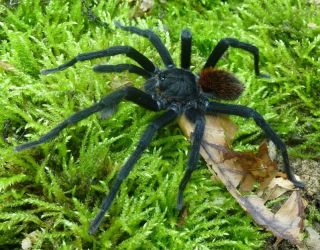 A fearsome tarantula covered in bizarre "attack" hairs has been discovered in a mountain range in Colombia. As an homage to the country where the new species was found, scientists named it Kankuamo marquezi, after Gabriel García Márquez, the Colombian Nobel Prize-winning author of the classic novels "100 Years of Solitude" and "Love in the Time of Cholera."

The researchers realized they had a new genus and species of spider as soon as they examined it. The spider's "attack" hairs, or urticating hairs, look different from all other known tarantula hairs, the researchers found. Most tarantulas "kick" their urticating hairs at enemies, but the newfound spider is the first known species in its subfamily to use its hairs in direct contact attacks, they said.

"This new finding is a great contribution to the knowledge of the arachnids in Colombia, and a sign of how much remains to be discovered," the researchers said in a statement. [See Photos of the World's Largest Spider, the Goliath Birdeater]

As with other types of tarantula, the females are larger than the males.

The researchers, led by Carlos Perafán, an entomologist at the University of the Republic in Uruguay, found the tarantula in the Sierra Nevada de Santa Marta mountain range in Colombia.

The spider's genus name, Kankuamo, honors the indigenous people of Colombia, who live on the eastern slope of the Sierra Nevada de Santa Marta, and whose culture and language are on the verge of extinction, the researchers said.

The species name pays tribute to Márquez (1927-2014), the famed Colombian author who won the Nobel Prize in literature in 1982.

While Márquez is famous for his magical realism, the newfound tarantula will likely be known for its extraordinary barbed hairs. These hairs likely evolved to defend the spiders against direct contact, the researchers said.

By studying these unique barbed hairs, the researchers hope to uncover how K. marquezi is related to the different subfamilies within the Theraphosidae family of tarantulas, and to learn about "the evolutionary pressures that gave rise to the urticating hairs," the researchers said.

The study was published online June 29 in the journal ZooKeys.