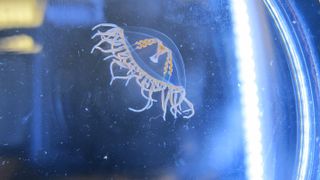 A dime-size jellyfish that can deliver severely painful stings has been spotted in New Jersey waters for the first time.

Gonionemus vertens, commonly known as the clinging jellyfish, is responsible for the hospitalization of a man named Matt Carlo, according to a June 15 alert posted on Facebook by the Monmouth Beach Office of Emergency Management in New Jersey. Carlo was stung while swimming in the Shrewsbury River in Monmouth Beach.

Since then, clinging jellyfish have reportedly been found in several river and bay locations near the Monmouth Beach area, the Monmouth Beach Police Department (MBPD) confirmed in a June 16 statement. However, experts said that ocean beachgoers should be safe from the jelly's tiny tentacles, as the animals are too small and fragile to survive waves close to shore. The jellyfish will only be found in quieter waters, like the river in which Carlo was swimming. [In Photos: The Best US Beaches of 2016]

According to the MBPD statement — their most recent statement about clinging jellyfish as of June 22 — "There have been no prohibitions or warnings issued regarding swimming in the river by any agency.”

An invader from the Pacific

Clinging jellyfish are native to the Pacific Ocean, but have been found in the Cape Cod area since 1894, according to Annette Govindarajan, a marine biologist and research specialist at Woods Hole Oceanographic Institution. The jellies use adhesive pads on their tentacles to attach to algae and sea grasses such as eelgrass.

Scientists studied the Cape Cod clinging jellyfish in the early 1900s, before the creatures dwindled and appeared to vanish in the 1930s following an eelgrass die-off, Govindarajan told Live Science.

Prior to that, Govindarajan said, the researchers and collectors who were handling the jellies in Massachusetts made no reports of stings. Clinging jellyfish populations near Russia and Japan were known to cause severe sting reactions in people. But in some areas of the northeast Pacific, the creatures didn't deliver such painful stings, suggesting that not all clinging jellies delivered a toxic pinch.

"The Cape Cod populations were assumed to be the variety that didn't cause severe stings," Govindarajan said.

However, in 1990, the clinging jellyfish appeared near Cape Cod again — and painful stinging incidents were reported for the first time. And the clinging jellyfish that are newly arrived in New Jersey appear to cause severe reactions, too. Carlo, who was stung on June 15, was given morphine to counteract the jellies' toxin, the Asbury Park Press (APP) reported.

"I thought I was going to die — that's how much pain I was in," Carlo told the APP.

Paul Bologna, the director of the Marine Biology and Coastal Sciences Program at Montclair State University in New Jersey, has been studying eelgrass ecology for 15 years. He was already planning on searching for clinging jellyfish in New Jersey eelgrass beds this summer when he began hearing about sightings in June.

So far, Bologna has collected clinging jellyfish specimens in two locations: the Point Pleasant Canal between Manasquan and Barnegat Bay, and in the Monmouth Beach/Oceanport area. His findings there suggest there are at least two established populations, Bologna told Live Science.

Clinging jellyfish begin life as polyps, which are too small to be seen with the naked eye, Govindarajan said. The polyps reproduce asexually and can create 30 to 40 clones in a year. "Populations can increase rapidly from asexual budding," Bologna said. "Identifying where the polyps are is important for jellyfish control."

But even as Bologna and other researchers work to identify where in New Jersey the clinging jellyfish are settling — and where they came from — there's one place where experts are confident you won't see these tiny jellies — near ocean beaches.

"If they get mixed into the surf, they get chewed up and torn to bits," Bologna told Live Science. "People going to ocean beaches have very little to worry about. But if you decide to swim at night in a lagoon, the encounter rate might be higher," he said.