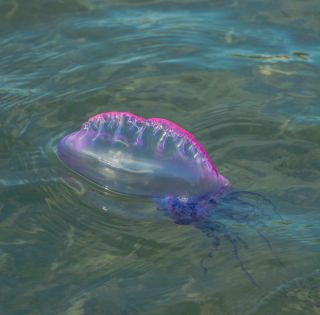 Like cast members on a distasteful reality show, Portuguese man-of-war "jellyfish" are descending upon the Jersey Shore in increasing numbers.

Last week, one of these venomous creatures (which are related to jellyfish) washed up in Harvey Cedars, a town on Long Beach Island, New Jersey. This week, four more of the stinging critters came ashore along the same stretch of beach and other specimens were reported elsewhere on the island.

But don't panic (yet). There are a number of rules you can follow to avoid getting stung by a man-of-war: [Dangers in the Deep: 10 Scariest Sea Creatures]

Man-of-war fish have stinging cells that are still active and capable of stinging even after the creature is dead, according to Paul Bologna, associate professor of biology at Montclair State University in New Jersey. But these cells are like a "mouse trap," Bologna told Live Science. If you don't touch them, they won't hurt you.

Rule No 2: Listen to lifeguards

Of course, if you happen to be swimming in the water near one of these creatures, avoiding a sting might be harder to do. Man-of-war "jellyfish" have tentacles that typically extend about 8 feet (2.4 meters) under the surface of the water, according to Bologna. But their tentacles can grow to be much bigger than that, with some growing to be as long as 165 feet (50 m), according to the National Geographic Society.

For the past few weeks, lifeguards on Long Beach Island have been verbally warning swimmers to stay out of the water whenever one of these venomous critters washes ashore, according to Randy Townsend, lifeguard captain of the Harvey Cedars Beach Patrol. Townsend told Live Science that lifeguards also post signs and update their social media pages with information about the creatures.

If you follow these first two rules and still are unlucky enough to get stung by a man-of-war, then you'll want to heed this next guideline. You may have heard that peeing on a jellyfish sting makes the stinging sensation go away, but that's not the case. A 2011 study conducted at the Straub Clinic & Hospital in Honolulu found that urine might actually make jellyfish (or man-of-war) stings worse. Emergency medical experts and lifeguards (including Harvey Cedars' Townsend) agree.

What might help you feel better if you get stung is hot water, according to Angel Yanagihara, assistant research professor at the University of Hawaii at Manoa. Before soaking a sting in water, you'll want to remove any tentacles stuck to the skin by dousing the site with seawater, according to a recent scientific review published in the journal Wilderness & Environmental Medicine. Don’t touch the tentacles with your bare hands, and don't scrape them off your skin with objects like a credit card or razor, because that could increase pressure around the sting, Yanagihara said.

Fresh water should not be used to rinse off a man-of-war or jelly sting, according to Yanagihara and other experts. Fresh water can actually cause the stinging cells, or cnidae, left on your skin to discharge, which could make the sting worse. Yanagihara suggests soaking the sting in hot water saturated with Epsom salts. The recent scientific review also recommends soaking it in hot water for 20 minutes (except if the sting is from an Australian box jellyfish).

While cold compresses are sometimes recommended to relieve pain after a sting, Yanagihara said these can be dangerous because they increase the pressure around the site of a sting. The use of vinegar and other acidic compounds to relieve pain is also disputed. The scientific review recommends washing stings with vinegar, but only for certain species, of which the Portuguese man-of-war (Physalia physalis) is not one. However, the same review also noted a lack of controlled clinical trials to test the effectiveness of acidic compounds at treating man-of-war and jelly stings.

Rule No. 4: If you have a bad reaction, seek medical care

Man-of-war stings are almost always more severe than the stings of smaller, less venomous jellyfish, according to Bologna. But it's important to note that jelly stings are not at all like bee stings, according to Yanagihara, who said that the body's response to jelly venom is not caused by the Immunoglobulin E (IgE) immune response mechanism that plays a role in severe anaphylactic reactions to bee stings, for example.

Instead, reactions to jelly or man-of-war stings are caused by bacterial toxins that destroy cells directly without involving the IgE antibody or the immune system. This distinction is important because, unlike bee stings, jelly stings should not necessarily be treated with epinephrine (EpiPen), Yanagihara said. In fact, using an EpiPen after a jelly sting can be dangerous or even life threatening, she said.

If you get stung by a man-of-war and you have trouble breathing, this could be a result of severe envenomation, and you'll want to see a medical professional immediately. Extremely painful stings also require medical attention, as do stings that make you feel dizzy or disoriented, according to Bologna, who said that these symptoms are associated with the toxins in a man-of-war's venom. Women and children, who may have thinner skin than adult men, might be more susceptible to severe envenomation, as is anyone stung on thinner parts of the skin (like the hands, feet or inner thighs), according to Yanagihara.