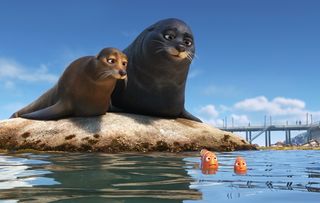 A famously absent-minded fish swam back to the big screen and into audiences' hearts, as the Walt Disney/Pixar movie "Finding Dory" opened in theaters across the U.S. The animated film revisits the lively and colorful world of sea creatures first introduced to audiences in 2003's "Finding Nemo."

Many of these characters — from newcomers Hank the octopus and Destiny the whale shark, to returning favorites Nemo the clownfish and Squirt the sea turtle — belong to species that are easily recognizable. But how closely do the movie's animated "stars" mirror their real-world animal counterparts? Live Science spoke to an expert in aquatic life to find out. [Photos: Meet 'Finding Dory' Real-Life Counterparts]

Two of the new characters that "Finding Dory" introduces are regal blue tangs Charlie and Jenny (voiced by Eugene Levy and Diane Keaton, respectively), the parents that Dory was separated from early in her life under circumstances that she can't remember. But would a blue tang have caring, nurturing parents, as the story suggests? Definitely not, says Becky Ellsworth, a curator at the Columbus Zoo and Aquarium.

"Blue tang parents don't care for their young," Ellsworth told Live Science. In fact, according to Ellsworth, it would be unlikely for blue tangs to meet their offspring at all — except by accident.

"They spawn in the water column," Ellsworth said. "And the spawn are carried away by the ocean currents and deposited in coral reefs. The fry — baby fish — hatch and are on their own from the beginning."

And sea turtles are equally unlikely to share a close bond with their parents, such as the one enjoyed by father-son pair Crush and Squirt (voiced by Andrew Stanton and Bennett Dammann), whom audiences first met in "Nemo."

Female sea turtles lay their eggs in nests that they build on beaches — and once they cover them up with sand, the mama turtles lumber into the water and never look back. When the babies hatch, usually under a full moon, they find their own way to the ocean and have to survive all by themselves, Ellsworth told Live Science.

Nemo and other clownfish, however, are a different story. According to Ellsworth, scenes from "Finding Nemo" that showed Nemo's father caring for the eggs were quite accurate.

"Clownfish lay their eggs in reef anemones, and the dad will watch over them and fan them — which helps to keep the anemone clean and free of algae, and also protects the eggs," she said. (Anemones are in the same group as jellyfish.)

Another new character that Dory befriends is Hank (played by Ed O'Neill), a dour but wily octopus that she meets in a center for rehabilitating marine wildlife in California. Hank demonstrates remarkable prowess at camouflaging himself and maneuvering in and out of tight spots; Ellsworth confirmed that this navigational talent is well documented in octopuses kept in captivity. [8 Crazy Facts About Octopuses]

"They're very intelligent," she said. "And they have no bones, so they can squeeze into places that we never expected."

In fact, Ellsworth said, octopuses that live in aquariums are frequently given activities and challenges to keep them occupied — and out of trouble.

"We have them work for things. We'll give them a mason jar with a food treat inside, and they can unscrew it underwater," Ellsworth explained.

Dory encounters many other animals during her travels — including a beluga whale, sea lions and seabirds — all of which would be more likely to eat a blue tang than befriend one in real life, Ellsworth noted. But even if the relationships in "Finding Dory" are more grounded in Hollywood storytelling than in marine biology, the film can still encourage greater appreciation of the ocean and its inhabitants, and inspire people to protect them, she said.

"This type of movie really energize audiences to learn more about the animals, to get excited about ocean life," Ellsworth told Live Science.

"There are things we can all do to help save Dory and her friends, like eating sustainable seafood, recycling and watching what we put in our drains. Whether you live near an ocean or not, we're all connected to it," Ellsworth said.