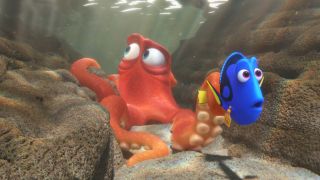 Absent-minded Dory (Ellen Degeneres) is a Pacific regal blue tang (Paracanthurus hepatus). They live in coastal waters in tropical areas and serve an important role in reef systems by eating algae that accumulates on corals and sponges.

Tangs belong to a group known as "surgeonfish," so-named for the spine at the base of their tails that they use to defend themselves from predators.

One of the new characters introduced in "Finding Dory" is Hank (Ed O'Neill), an octopus with an attitude who's also a skilled escape artist.

There are over 150 species of octopus, most of which live in warm waters in tropical or sub-tropical areas.

Octopuses are invertebrates — animals without skeletons — and are well-known for their abilities to contort their soft bodies into tight spots, and stage daring breakouts from captivity.

The largest fish in the world, whale sharks can grow to be 40 feet (12.2 meters) in length, and are recognizable not only for their size but for a distinctive checkerboard pattern of light spots and darker bars on their back and sides.

Though mostly solitary creatures, they sometimes gather seasonally in large numbers, in parts of the ocean where food is abundant.

Dory's travels carry her — and her friends — toward the western coast of the U.S., where they meet Fluke and Rudder (Idris Elba and Dominic West), a pair of California sea lions (Zalophus californianus).

Unlike true seals, sea lions have visible ear flaps, and can walk by rotating their hind flippers and using them like feet.

Babies are dark grey at birth, gradually lightening to become completely white when they are about 5 or 6 years old.

The orange clownfish (Amphiprion percula) lives in reefs and enjoys a mutually beneficial relationship with the anemone, a predatory jellyfish relative that attaches to coral reefs at its base.

Clownfish clean algae from the anemones, laying their eggs in them and using them as protective cover from predators.

Loons are waterbirds native to Canada and the northern U.S., where they live near coastal areas, lakes and reservoirs.

These skilled divers plunge underwater to catch their prey, and a family of two adults and two chicks can consume about 1,000 pounds (454 kilograms) of fish in a 15-week period, according to the Cornell Lab of Ornithology.

Eagle rays can reach about 30 feet (9 meters) in length, and can weigh as much as 507 pounds (230 kilograms), and they are widely distributed in tropical coastal waters around the world.

Some of the new faces in "Finding Dory" are fuzzy — meet the baby otters, which are likely to win audiences' hearts without having to say a word.

The sea otter (Enhydra lutris) is the smallest species of marine mammal and has the densest fur of any animal on Earth — over one million fibers per square inch of skin.

Otters are also known tool-users, collecting and saving rocks that they use to crack abalone shells.

In real life, sea turtles — of which there are seven species — likely never even meet their fathers, as babies hatch from nests on beaches and find their way to the ocean alone.

Females are known to swim thousands of miles to reach preferred nesting sites. Scientists recently found that they navigate using magnetic signatures along coastal regions to help them find their way.