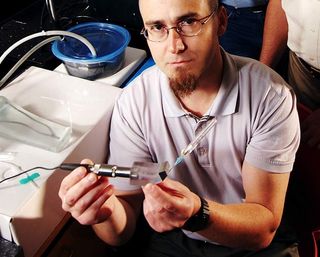 In the adding-insult-to-injury department, being pricked multiple times with a needle while a nurse tries in vain to find a vein ranks pretty high. The problem can be acute with infants and the obese.

Jim Larsen, a researcher at the Georgia Institute of Technology, was in the hospital once and required several blood tests. All the poking caused swelling and inflammation in his arms, which made it increasingly difficult for nurses to find his veins.

"It often took seven or eight tries," Larsen recalls. "It wasn't long before I felt like a pin cushion."

Now Larsen and his colleagues are working on a solution. They're developing a portable device that would find veins.

The vein finder works by using the Doppler effect, a well-known phenomenon also employed to detect rainfall and even find extrasolar planets. The Doppler effect is what makes an ambulance siren change pitch when it passes you. Sound waves are compressed when the ambulance is coming at you, and they are stretched when it drives away, changing the sound's pitch.

By applying a narrowly focused beam of ultrasonic energy at a certain angle, the vein finder uses the Doppler effect to detect moving blood and determines the direction of flow. Arteries carry blood away from the heart, and veins carry it back.

Like a stud finder used by contractors, the vein finder beeps when it detects a target. A nurse would then activate an attached needle.

The sensor has worked in tests on a model that simulates human tissue and blood vessels. Next up are human tests. Later, data processing and electronics have to be miniaturized to create a prototype for field-testing.

The researchers envision the thing ultimately being the size of a fat fountain pen that could be used by ambulance services and the military. But it would be welcome in any hospital or nursing home.

"Similarly, because cardiac patients' hearts aren't pumping properly, their veins are hard to locate," Reynolds said. "It's also difficult to find veins in obese people and young children because their vessels are covered by layers of fat."