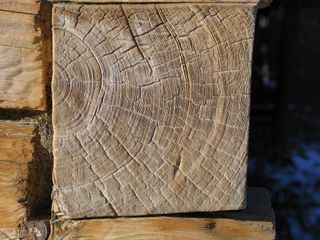 Tree rings hold a record of annual growth, which researchers can use to extrapolate weather. This is fir timber from a historical building in southern Poland.
(Image: © Ulf Büntgen)

In 1241, the Mongol army marched into Hungary, defeating the Polish and Hungarian armies and forcing the Hungarian king to flee. In 1242, despite meeting no significant military resistance, the Mongols abruptly packed up and left.

Now, a new study of the climate in Eastern Europe that year suggests a reason for this mysterious military retreat: The Mongols got bogged down. Literally.

A cold and snowy winter yielded to a particularly wet spring in Hungary in 1242, according to data from tree rings. As a result, the grasslands of Hungary turned to marsh, said study researcher Nicola Di Cosmo, a historian at Princeton University. The Mongols, dependent on their horses, wouldn't have been able to move effectively across the squishy land, and their steeds would have had few fields to graze.

"This is one of the very few cases in which we can identify a minor climatic change on just one winter and link it to a particularly important historical event," Di Cosmo told Live Science. [10 Surprising Ways Weather Has Changed History]

The invasion of Hungary

The invasion of Hungary happened well after the death of notorious Mongol leader Genghis Khan in 1227. His successor, his son Ogodei, led the Mongols into Russia in 1235 and into Eastern Europe by 1240.

Multiple Mongol commanders brought at least 130,000 troops and perhaps as many as half a million horses into Hungary in the spring of 1241, Di Cosmo wrote in the journal Scientific Reports. They won key battles in April of that year, beating both the Polish and Hungarian armies and setting up an administrative system in eastern Hungary.

In the early months of 1242, the Danube and other rivers in the region froze solid, according to contemporaneous reports. This allowed the Mongols to move into western Hungary, where they spent several months fighting until their sudden retreat.

Di Cosmo's co-author Ulf Büntgen, a climate researcher at the Swiss Federal Research Institute WSL, examined tree-ring data from northern Scandinavia, the Polar Ural, the Romanian Carpathians, the Austrian Alps and the Russian Altai to untangle the climate factors that might have led to the Mongol army's actions. Previous theories had held that perhaps Ogodei's death in December 1241 prompted the main Mongol commander to head home; but that's unsatisfying, Di Cosmo said, because the commander never went back to Mongolia to take part in the politics there — he ended up back in Russia.

Tree rings hold a record of the tree's summer growth and winter quiescence, which researchers can use to extrapolate what the weather might have been like in a particular year. The record that Büntgen examined told a tale of above-average temperatures in Hungary between 1238 and 1241, followed by a sudden spate of cool summers between 1242 and 1244. In 1242, the region encompassing southern Poland, the Czech Republic, western Slovakia, northwestern Hungary and eastern Austria was exceptionally wet, the researchers report today (May 26) in the journal Scientific Reports.

The finding that spring flooding probably stymied the Mongols makes sense, Di Cosmo said, because the grasslands of Hungary were notoriously marshy until major draining projects in the 1700s and 1800s. The Mongols also retreated via different routes than their initial invasion, skirting through the Carpathian foothills and other high ground, Di Cosmo said.

"All of this, I think, is evidence that they were not happy with the terrain where they were operating," he said.

Di Cosmo and his colleagues have previously found that a stretch of warm, wet weather between 1211 and 1225 probably helped fuel the Mongols' initial expansion by giving them ample fodder for their horses. And other climate researchers have found that the Mongols may have influenced the climate as well: In 2011, researchers reported that the Mongol invasion of the 1200s had a tiny but perceptible effect on global carbon dioxide levels because the amount of death and destruction their expansion caused slowed deforestation for agriculture.