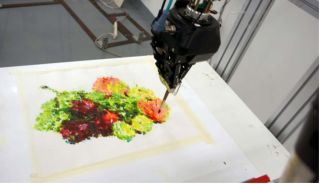 The TAIDA robot won the competition by painting a still life of a bowl of fruit in a classical style.
(Image: © by TAIDA National Taiwan University)

While the world's great artists have all been humans so far, robots may soon give the old masters a run for their money. Participants in the first annual Robot Art competition showed just how far our silicon counterparts have come in creating great artwork.

The robots took a variety of approaches, with some coming up with their own compositions, or challenging themselves to work with a limited palette.

"The results of this competition show a significant step in the advancement of robotics and artificial intelligence to create beauty. In addition to being geographically diverse, the approach to creating art that these robots took varied significantly, sometimes in unexpected exciting ways. Some robots concentrated on mastering traditional painting techniques, others experimented with artificial creativity, while others explored the nature of human/robot collaboration. I am excited to see how new teams take in this year's results, and try to top them in next year's competition," RobotArt.org founder Andrew Conru said in a statement. [See Images of the Robot-Produced Paintings]

The Robot Art competition drew 70 different competitors, and each of their paintings had a unique look and style. Though the idea of a robot producing art may seem fantastical, most of the paintings stuck to fairly traditional subject matters and styles.

The winner of the competition, a paintbrush-wielding robot called TAIDA from Taiwan University, painted a still life of a bowl of fruit in a classical style. TAIDA impressed the judges with its artistic sensibilities by mixing its own color palette and painting under-layers before going in and coloring over parts, to make the image match mostly with the "vision" it had in mind, similar to the process human artists take. TAIDA's creators took home a prize of $30,000.

The second-place winner, cloudPainter, was designed by Pinder and Hunter van Arman, who wanted their robot artist to have true artistic license. The cloudPainter bot oversaw the entire creative process by taking pictures, cropping them and choosing the best one, and making each brushstroke independently. The robot earned its creators an $18,000 prize.

The third-place winner, NoRAA, earned a $12,000 prize for its abstract paintings. The robot's creator, Patrick Tabarelli, sought to represent the interplay between algorithms and the physical world, he said.

Judges Patrick and Jeannie Wilshire noted that it was an example of "artwork produced by a robot, rather than through a robot."

While scientists and artists have experimented with computer-based painting for decades, and industrial robots have been a mainstay for painting cars, the rise of robot-created art has been slow. Early attempts experimented with using the robot as a tool for laying down the human artist's vision.

More recently, however, the robots have been taking over more of the creative process. In April, researchers unveiled the "Next Rembrandt," a painting done in the style of the famous painter that used artificial intelligence to select the subject matter, compose the painting, and execute the actual painting with a specialized printer.