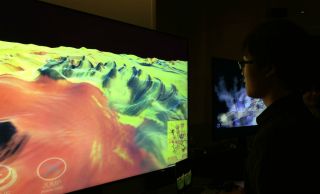 "Walking" across the landscape of a painting's surface with "Paint Walker," at the Metropolitan Museum of Art.
(Image: © Mindy Weisberger)

NEW YORK — Walking across a highly magnified Van Gogh painting of sunflowers. Playing an 18th-century piano. Painting 3D worlds. These were some of the digital experiences delivered by the Metropolitan Museum of Art last week.

The Met showed off new technologies at an open house on Friday (May 13), to enhance how visitors experience and interpret art in its many forms.

Virtual reality, social networking with mobile devices, and tabletop gaming were just a few of the methods employed in a number of media prototypes that museumgoers could use to interact with objects in the collection — and with each other. [5 Delightfully Tech-y Dresses from the 2016 Met Gala]

Gamers familiar with the blocky world of "Minecraft" would have felt right at home in "MetCraft: Antiquity Adventure," a "Minecraft" map inspired by several Met rooms — the Great Hall, the Greek and Roman wing, the Egyptian wing, and the Temple of Dendur. Players could explore the rooms and objects, and perform activities that drew from information provided during a tour of the actual spaces in the museum. The new media projects were created by the Met Digital Department and Met MediaLab, in collaboration with graduate students at the New York University Game Center.

With the Met Music app — still in beta — users could take a turn at playing notes recorded from the oldest surviving hammer-action piano — crafted by Bartolomeo Cristofori in 1720 — on an iPhone touch screen. Just as Cristofori's novel hammer mechanism allowed musicians to modulate the volume of a struck key (for the first time), the app enabled users to play a series of notes from the 18th-century piano at different volumes.

What might some of the fine artists featured in the Met's collection have done with virtual-reality tools at their disposal? Museum visitors experimented with building their own immersive artwork at the "Experiments in Tilt Brush" station, where the HTC Vive virtual-reality technology was paired with the Google art program Tilt Brush. Players used handheld controllers to "paint" strokes that were suspended in 3D space, using a range of colors and textured "brushes" that simulated ink, paper, taffy, fire and sparkling stars, to name a few.

For visitors who preferred to experience their art up close, "Paint Walker" provided the unique virtual experience of strolling across the highly magnified surface of a painting. A reproduction of one of Vincent van Gogh's richly colored sunflower paintings was scanned at high resolution and loaded into a program for users to explore in virtual reality or on a monitor using a conventional game controller. Once the camera zoomed in, the textured paint appeared as a mountainous, cratered landscape to run and jump across.

These experiences represent several of the recent initiatives developed by the Met MediaLab to explore the intersection of technology and culture, and to find new ways for visitors of all ages to appreciate masterpieces from the past and discover applications for digital media in artistic expression of the future.