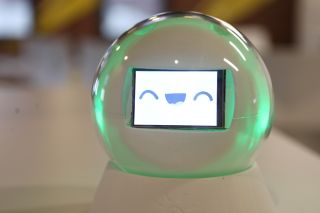 Meet Leka, a rolling robot that can be programmed to engage with children that have developmental disabilities.
(Image: © Leka)

The rolling robot BB-8 captivated moviegoers as it helped save the day in the 2016 film "Star Wars: The Force Awakens" — though even the most die-hard fan would admit that we aren't likely to see a real-world robot quite like that in the near future.

Described by its designers as "a robotic companion," the roly-poly Leka robot is shaped like a ball, has an endearing "face" that changes expressions, and uses sound, light and colors to interact with users through customizable games that improve cognitive and motor skills. Caregivers and educators can program the toy to guide children with developmental disabilities through a range of activities, helping them to improve communication and learn to connect with their environment and with others around them. [The 6 Strangest Robots Ever Created]

For children with Autism Spectrum Disorder (ASD), connecting with others and interpreting social cues can be enormously challenging. ASD describes a collection of neurodevelopmental disorders relating to communication difficulties and characterized by repetitive behaviors, according to the National Institutes of Health (NIH).

ASD typically manifests in infancy or early childhood and occurs across ethnic groups, and the Centers for Disease Control and Prevention (CDC) estimates that it affects approximately 1 in 68 children. Its causes are unknown, though genetics, parental age and exposure to certain pesticides and pharmaceuticals have been suspected to increase a baby's risk of being born with ASD.

To determine how interactive technology might help children with ASD and other developmental disabilities, Leka's creators worked closely with educators, parents and children to determine their needs, researching in particular the role that robotics could play.

And during the course of their research, they discovered that children on the autism spectrum respond especially well to robots, according to Leka CEO and co-founder Ladislas de Toldi. For those working with children who have ASD, repetition and predictability are important, de Toldi told Live Science.

By reliably performing the same actions over and over, a robotic companion like Leka provides the child with a sense of safety, de Toldi explained.

Leka senses and responds to a child's participation in games like color identification, picture matching or hide-and-seek, controlled via Bluetooth and programmed through an app available for iOS and Android. During gameplay, Leka supplies positive images and sounds — for instance, showing a smiling face or emitting laughter — to reward progress and encourage confidence.

The customizability of the games allows caregivers to adjust the level of stimulation to suit the individual by adding or removing lights, colors or sound displays. Each game has settings that track a child's progress over time, and difficulty levels can be increased as the child progresses. Meanwhile, handling the spherical Leka provides children with a uniquely tactile interactive experience that they can't get from a touch screen.

"It's a new way to get kids engaged and motivated," de Toldi said.

The Indiegogo campaign for Leka — now more than 90 percent funded — runs through June 3, 2016. It will enable mass production of the toy and make it available for distribution directly to parents, caregivers and therapists, at a preorder cost of $390. Currently programmed with three educational games, Leka will offer a total of seven activities when it ships in early 2017, the company said.