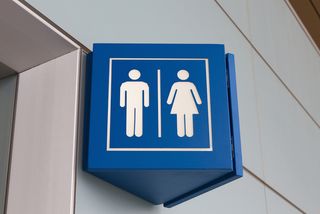 In North Carolina and other states, a new culture war has erupted. This time, the battlefield is bathrooms.

In March, North Carolina enacted a law (colloquially known as HB2) that requires that people use only bathrooms that correspond to the gender on their birth certificates. The law affects transgender individuals, who identify as a gender other than the one they were assigned at birth. Other states have considered similar bills, to great controversy.

To some people, public bathrooms may seem like unassuming spaces — necessary but not worth too much thought. But these bathroom bills illustrate that public restrooms are the stage for many complex social interactions, and that the availability of a place to relieve oneself is crucial in society.

Gender-segregated public restrooms are either very old or very new, depending on how you look at the question. They arose in the Victorian era, along with widespread plumbing, meaning they've been around almost as long as the modern bathroom itself. On the other hand, having privacy for peeing is a relatively modern phenomenon.

The notion of privacy itself is shifting constantly, and it can be hard to determine how people of the past viewed the importance of privacy in their bathroom habits. Ancient Rome, for example, is famous for its multiseater bathrooms, where people sat side by side on benches, without partitions, to do their business. However, there are hints that a concept of privacy might have existed. In Hadrian's Villa, a second-century site in Tivoli, Italy, there were multiseat facilities for servants and staff, according to a 2003 paper in the Journal of Roman Archaeology. However, the emperor and high-status guests seem to have had access to relatively private single-seaters. [Through the Years: A Gallery of the World's Toilets]

"[T]he provision of single-seaters, especially for guests, shows that, when space and money were no object, [the elite] preferred single toilets," wrote study researcher and independent archaeologist Gemma Jansen.

The first gender-segregated public restroom on record was a temporary setup at a Parisian ball in 1739, said Sheila Cavanagh, a sociologist at York University in Canada and author of "Queering Bathrooms: Gender, Sexuality, and the Hygienic Imagination" (University of Toronto Press, 2010). The ball's organizers put a chamber box (essentially a chamber pot in a box with a seat) for men in one room and for women in another.

"Everyone at the ball thought this was sort of a novelty — something sort of eccentric and fun," Cavanagh said.

But for the most part, public facilities in Western nations were male-only until the Victorian era, which meant women had to improvise. If they had to be out and about longer than they could hold their bladders, women in the Victorian era would urinate over a gutter (long Victorian skirts allowed for some privacy). Some would even carry a small personal device called a urinette that they could use discretely under their skirts and then pour out, Cavanagh said. Strangely, these urinettes were sometimes shaped like the male genitals. [How Much Urine Can a Healthy Bladder Hold?]

This lack of female facilities reflected a notable attitude about women: that they should stay home. This "urinary leash" remains a problem in some developing nations, said Harvey Molotch, a sociologist at New York University and co-editor of "Toilet: The Public Restroom and the Politics of Sharing" (New York University Press, 2010). Women in India today, for example, often have to avoid eating or drinking too much if they have to be out in public, because there is no place for them to go, Molotch told Live Science.

Thus, the first gender-segregated restrooms were a major step forward for women. Massachusetts passed a law in 1887 requiring workplaces that employed women to have restrooms for them, according to an article in the Rutgers University Law Review. By the 1920s, such laws were the norm.

Victorian-era Americans were segregated by gender in many spaces, Molotch said. There were ladies-only waiting rooms in train stations, and female-only reading rooms in libraries. As sex segregation has fallen to the wayside in other public spaces, bathrooms remain the last holdout, he said.

"Restrooms are a very funny place, because they're where the most intimate actions occur that are also in public," Molotch said. In the U.S., bathrooms are partitioned with flimsy barriers with lots of gaps, in part because of anxiety over what might go on in a fully private stall. Sex and drugs are the most common of these concerns, he said.

Meanwhile, people observe rigid social rituals to keep up the illusion of privacy. Men, for example, can't be seen looking at the genitals of other men, Molotch said, but also can't be perceived as trying not to look. [10 Things That Make Humans Special]

"The disgust attached to excretion makes people bothered by the sounds and smells of others, and the shame of this private action makes many people concerned about being witnessed in the act, even indirectly," said Nicholas Haslam, a psychology professor at the University of Melbourne and author of "Psychology in the Bathroom" (Palgrave Macmillan, 2012). Excretion is seen as unfeminine, Haslam told Live Science, so women are under particular pressure to hide their bathroom activities, especially from men.

"Finally, the act of going to the bathroom makes many people feel vulnerable, exposed, and unsafe," Haslam said.

Bathroom bills like North Carolina's often reflect ideas about sex and safety, Cavanagh said. However, there are no documented instances of a transgender person attacking anyone in a public bathroom, she said. A survey published in the Journal of Public Management and Social Policy in 2013 did find, however, that 70 percent of the transgender respondents from the Washington, D.C., area had experienced harassment or assault in bathrooms, or had been denied access to facilities.

Ultimately, fears over allowing bathrooms to be used by people of different birth sexes may have more to do with the symbolic nature of public restrooms than with practical concerns. Transgender people challenge the notion that a person's gender and their biological sex at birth are one and the same in all cases, Molotch said, which makes some people uncomfortable. However, he suspects that the backlash will simmer down and that gender-segregated toilets will persist, with an agreement that everyone will mind their own business.