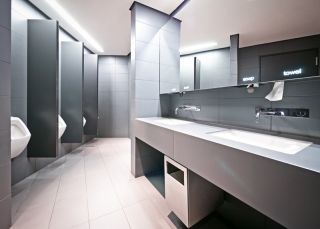 Ah, spring — time to get out of the house and be on the go. But when you're out and really have to, you know, go, is that rest-stop bathroom the place to do it?

Yep. Public toilets might get a little grimy, but they're very unlikely to pose any threat to your health. Most bacteria that could be any danger to people perish quickly on barren bathroom surfaces. And a functioning immune system (plus hand washing!) will stave off most of the rest.

"The restroom isn't that dangerous," said Jack Gilbert, a microbiologist at Argonne National Laboratory in Illinois. "The organisms which can grow there have a very low probability of being able to cause an infection." [11 Surprising Facts About Your Immune System]

Gilbert is the co-author of a 2014 study in the journal of Applied and Environmental Microbiology in which researchers tracked the microbiomes of four university restrooms over hours and days.

The study was unique in following the bacteria denizens of the bathrooms over time. Earlier research had included one-time samples and found a variety of microscopic life forms. For example, researchers reported in a 2011 study published in the open-access journal PLOS ONE that they had discovered 19 phyla of bacteria in 12 restrooms on the University of Colorado Boulder campus. Ninety-two percent of the bacteria came from four human-associated phyla (taxonomic groups above classes but below kingdoms): Actinobacteria (found largely on the skin) and Bacteroidetes, Firmicutes and Proteobacteria (all found in the gut).

Unsurprisingly, skin-associated bacteria were found in areas often touched by hands: doors, stalls, faucets and soap dispensers. Gut-associated Firmicutes and Bacteroidetes were more prevalent on toilet handles and seats, likely due to fecal contamination from direct contact or from toilet spray. Lactobacillus bacteria, associated with the vaginal microbiome, were more commonly found in women's restrooms. [5 Things Your Poop Says About Your Health]

One-time samples offer only a snapshot of what kind of bacteria people are shedding into the environment, though — not what kind of bacteria can actually thrive there. Gilbert and his colleagues first sampled restrooms on an hourly basis and then sterilized the locations to start with a clean slate. They then allowed 4 more hours' use and then shut the bathrooms down for the rest of the day to see how the bacterial assortment changed with time.

People bring a lot of bacteria into bathrooms, the researchers found. Within an hour of normal use, there were 500,000 bacterial cells per square inch on the bathroom surfaces, on average.

"The bacterial load shed by the people using that space was extraordinary," Gilbert told Live Science.

But when left undisturbed, many of these bacteria quickly perished. Gut bacteria, especially, which don't do well tolerating oxygen, cold or lack of nutrients, did very poorly, Gilbert said. The cool, dry, barren surfaces of toilets, floors and bathroom fixtures are about as far from the warm, moist, nutrient-rich large intestine as you can get, he said.

Skin bacteria showed better survival. Some of the surviving bacteria did have the potential to be pathogenic, Gilbert said, but you'd have to try pretty hard to get sick. The skin-associated bacterium Staphylococcus aureus, for example, persisted for a long time on bathroom surfaces. But S. aureus is present on the skin in about one in five people, and generally causes problems only when people are immunocompromised or have open wounds.

"There were organisms, let's say, if you cut open your arm and you rubbed it on the floor, they may colonize that wound and cause an infection, he said.

Ultimately, hygiene, public health and vaccination have made it significantly less likely that you'll run across a dangerous pathogen while out and about, even in public restrooms. In theory, a virus like hepatitis A could be transmitted through fecal material in a bathroom, if people touched a toilet handle and then their mouth without washing their hands. But most people in the United States are vaccinated for hepatitis A at 1 year of age.

Tales of people infected with something in a public restroom are few and far between. One 2003 case study in The BMJ journal reported the story of an 8-year-old girl who came down with a gonorrhea infection from a restroom. Doctors concluded that she had mostly likely contracted the infection by wiping down a filthy airplane toilet seat with toilet paper, dirtying her hand and then wiping with that same hand.

In 1989, a study in The Lancet journal concluded that communal bathrooms might be a source of disease transmission on cruise ships during outbreaks of norovirus, a highly contagious gastrointestinal disease. (Norovirus spreads very easily in close quarters because vomiting can make viral particles airborne. The 1989 study, however, found that contact transmission — people touching viral particles on surfaces — was most likely how the virus spread in communal cruise ship bathrooms.)

Experimental studies have suggested that flushing a lidless toilet can create an aerosol plume of bacteria that could be potentially infectious, but there are not any proven examples of disease being transmitted in this way. One 2003 SARS outbreak in a Hong Kong apartment building was caused by diarrhea-contaminated u-traps in the building's plumbing system. But in that case, it wasn't toilet flushing that spread the virus, but rather bathroom exhaust fans pulling contaminated air into other bathrooms in the building, according to a 2013 review in the American Journal of Infection Control.

Ultimately, "the only places we see significant transference of illness on a regular basis, we believe, are health care environments, because people in that environment have had their immunity stripped away," Gilbert said. For healthy people, there is very little to fear in a public restroom, he said.

"For years we've been almost conditioned to accept that more bacteria [are] bad, and that's just not true," he said. "There's no evidence to support that conclusion at all. … Our obsession with overt sterilization and cleanliness, our paranoia, is just not helpful."