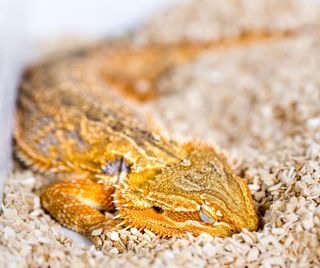 Australian dragons cycle through more than 350 episodes of rapid eye movement and slow-wave sleep each night, spending about half their sleeping hours in each phase.
(Image: © Dr. Stephan Junek, Max Planck Institute for Brain Research)

Do dragons dream? Maybe, according to new research that finds rapid eye movement (REM) and slow-wave sleep in a lizard, the Australian dragon, for the first time.

The discovery suggests that these phases of sleep may be more than 100 million years older than previously realized.

REM sleep is characterized by brain waves that look similar to waking brain activity. In mammals, the large muscles of the body are immobile, but the eyes twitch randomly during REM sleep. People do most of their dreaming in this phase of sleep. Slow-wave sleep is a non-REM sleep phase that is marked by slow brain waves called delta waves. [Top 10 Spooky Sleep Disorders]

Quiet, sleep-like periods are known in many animals, even invertebrates like fruit flies. However, researchers had only found REM and slow-wave sleep brain activity in mammals and birds. Both of those kinds of animals diverged from a common group, the amniotes — mammals, reptiles and birds that lay eggs on land or hold them in their bodies — more than 300 million years ago. The amniotes gave rise to the synapsids and the sauropsids. Mammals are the only group of synapsids left (the earliest arose about 195 million years ago). The sauropsids encompassed the dinosaurs as well as modern birds and reptiles.

The fact that sleep appeared only in these two disparate branches of the evolutionary tree was puzzling, said lead study researcher Gilles Laurent, a neuroscientist at the Max Planck Institute for Brain Research in Germany. It seemed that mammals and birds had independently evolved the brain patterns for REM and slow-wave sleep — a case of convergent evolution — or, more confusingly, that these sleep patterns were an ancestral trait that was lost multiple times among reptile lineages but somehow not in birds.

The new research, which will be published Friday (April 29) in the journal Science, suggests a much simpler explanation: REM and slow-wave sleep were present in a common amniote ancestor, and the fingerprints of these brain patterns had been missed until now.

"It poses many questions: How did sleep start? What did it start for? Is sleep the way that we understand it today in mammals, including humans, the same thing as what it started as?" Laurent told Live Science. "These questions are ones we'd like to find answers to."

Laurent and his colleagues didn't intend to study sleep, at first. His lab is interested in how the cortex works, and he uses lizards as model organisms to study this brain region. The researchers were using electrodes implanted in the brains of Australian dragons (Pogona vitticeps) to record brain activity.

"In the middle of some experiments we were doing, we decided to let the recordings go overnight after a day's work, just to see what would happen during the night," Laurent said. "And upon analyzing the results, there were interesting oscillations of activity that were very regular, that suggested the potential existence of sleep-related patterns of activity in the brain."

Further recordings of the brains of five different lizards of the same species revealed two distinct sleep patterns. One showed high-frequency wave forms of about 20 cycles per second. The other showed low-frequency wave forms of less than 4 cycles per second. Video recordings of the sleeping lizards showed that during the high-frequency brain activity, the dragons' eyes twitched periodically.

"We had a characterization that was starting to become more and more like what we observe in mammalian sleep," Laurent said. "A REM phase with broadband activity and high-frequency activity, and slow-wave sleep where there is no eye movement." [What Do Dogs Dream About?]

The slow waves also showed negative spikes of electrical potential 200 to 400 milliseconds long, interrupted with an oscillation of the brain's electrical activity, Laurent said. These "sharp waves" and "ripples" are seen in the slow brain waves of mammalian sleep, he said.

Modern equipment and analysis techniques likely allowed Laurent and his team to find these brain patterns where others had failed, Laurent said.

There are differences between the sleep of lizards and mammals, however. In humans, for example, the REM phase of the sleep cycle is relatively short. A person might experience just 5 minutes per hour of slow-wave sleep at the beginning of the night, and then, as this phase gradually lengthens, 15 or 20 minutes per 90 minutes of slow-wave sleep later on. In the Australian dragon, the ratio of REM to slow-wave sleep is about 50-50. And the dragon cycles between the two every minute or minute and a half. They experience up to 350 sleep cycles per night, compared to four or five in humans.

These patterns arose in a brain region called the dorsal ventricular ridge, which doesn't exist in mammals, Laurent said. The sleep patterns seen in the study were similar to the ones seen in the mouse hippocampus during sleep, but strangely, the dorsal ventricular ridge is not analogous in its connections or neural cell makeup to the mammal hippocampus at all, Laurent said.

The research suggests that REM and slow-wave sleep may have evolved in the amniotes, but the patterns found in the lizards studied may be even older, Laurent said. Amphibian sleep has been studied and sleep patterns have not been found, he said, but perhaps scientists need to check again.

In humans, REM sleep is closely associated with dreaming. So do Australian dragons dream? There's no way to be sure right now, Laurent said. The answer may also depend on how you define dreaming. Under a strict definition in which dreaming requires higher cognition, the answer might be no. But if dreaming were defined as a replay of brain activity during sleep that resembles brain activity during wakefulness, lizards might well dream, Laurent said.