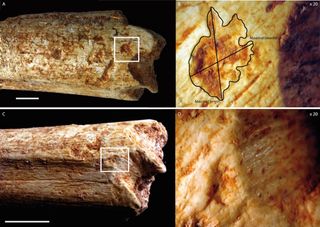 Researchers found carnivore tooth marks on the ends of a hominin femur bone. The close-ups on the right are magnified 20 times.
(Image: © Daujeard C. et al. PLOS ONE (2016))

Tooth marks on the leg bone of a hominin, an ancient human relative, suggest that the poor soul had a gristly end, a new study finds.

It's not surprising that a large, carnivorous predator would hunt down a hominin, said study lead researcher Camille Daujeard, a researcher in the Department of Prehistory at the National Museum of Natural History in France. [Image Gallery: Our Closest Human Ancestor]

"During this period, early humans likely competed for space [such as natural caves] and resources with large carnivores, who occupied many of the same areas," Daujeard told Live Science in an email.

Researchers first discovered the hominin bone in 1994, in a Moroccan cave named Grotte à Hominidés, near Casablanca. The cave contained ancient stone tools and a trove of bones, including those of the hominin Homo rhodesiensis and other animals, such as gazelles and jackals, dating to the Middle Pleistocene (a period lasting from about 781,000 to about 126,000 years ago.)

However, the femur sat unstudied for years, until study co-researcher Denis Geraads rediscovered it recently. Intrigued by the tooth marks and various fractures on the bone, the researchers did an intensive analysis of it. They concluded that a hyena likely caused the damage, largely because the fractures and tooth pits and punctures matched those of the big meat eater.

Moreover, the marks were covered with sediment, indicating that they were very old and were likely made at the time of death or shortly after it, the researchers said.

Other large carnivores might have fed on hominins as well, the researchers said.

"Extinct hyenas were the only large carnivores in Africa, Europe and Asia that regularly accumulated dense concentration of bones, especially in cave sites, but [this finding] does not imply that they were the greatest consumers of Plio-Pleistocene hominins," Daujeard said.

"We know that hominins were quite capable of slaughtering large gregarious prey, of evicting large carnivores off of their habitats and even occasionally hunting or exploiting them," Daujeard said. So both hominins and carnivores could have been predators, prey and scavenged leftovers, she said.

There are other Plio-Pleistocene remains of human relatives in caves used as hyena dens, some of which also contain tooth marks. But the newly studied femur is the first evidence that carnivores ate hominins in this part of Morocco during this time period, Daujeard said.

The study was published online today (April 27) in the journal PLOS ONE.