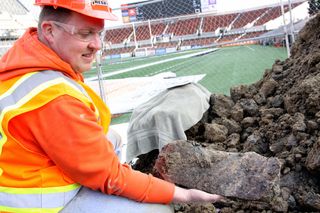 Oregon State University might want to consider changing its mascot after a monumental find yesterday (Jan. 25): The discovery of bones belonging to an ice-age mammoth within throwing distance of the school's football field.

A construction crew working on an expansion and renovation of the OSU Beavers' Valley Football Center uncovered the remains of the beast while digging in the north end of Reser Stadium. They found a large femur bone — likely a mammoth's — as well as bones from other extinct, ice-age mammals, including a bison and what is either an ancient horse or a camel.

"There are quite a few bones, and dozens of pieces," Loren Davis, an associate professor of anthropology at OSU, said in a statement. "Some of the bones are not in very good shape, but some are actually quite well preserved." [Image Gallery: Stunning Mammoth Unearthed]

Davis and his students have yet to determine the mammoth's species — for instance, it could be a Columbian mammoth (Mammuthus columbi) or a woolly mammoth (M. primigenius), although the latter tended to live farther north.

Davis' team also plans to use radiocarbon dating to determine how long ago the mammoth lived. Radiocarbon dating can date once-living organisms back to about 50,000 years, although different methods can help date older organic material.

In Siberia, researchers recently found a 45,000-year-old mammoth carcass with injuries indicating that ancient humans had butchered it. But the newfound mammoth in Oregon bears no such injuries, suggesting that it died of natural causes, Davis said.

"They weren't hunted by people, that's clear," he said. "Animals who were sick would often go to a body of water and die there, so it’s not unusual to find a group of bones like this."

Perhaps when these animals died, at least 10,000 years ago, the area where the stadium now stands was a bog or marsh that served as a watering hole for ice-age animals, Davis said.

Construction workers found the animal bones in a 10-foot-deep (3 meters) plot. They stopped work as soon as they uncovered the femur, said Tim Sissel, the senior project manager of Hunt/Fortis, a joint venture and general contractor on the project.

However, because there were no human artifacts or remains found, the site is not considered an archaeological site, Davis said. So, he and his colleagues removed the dirt containing the bones, and construction on the stadium continued.

Now that he has the bones, Davis said he would soak them in water to thwart further deterioration. The members of the team will also continue to examine the pile of dirt that encased the bones to see whether they can find any more ice-age remains.

"It just goes to show that there's a whole world of the past that exists under the ground, and [it's] so neat that we could actually find it here at Reser stadium," Davis said. "As you're watching a football game, you can be thinking that beneath your foot lie the bodies of extinct animals that relate to the past."