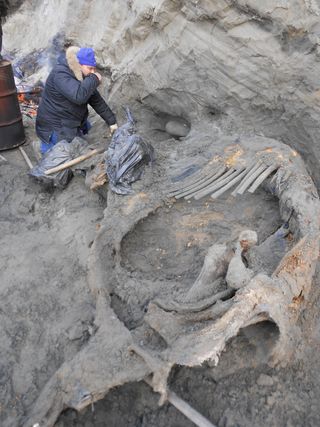 The injuries on this mammoth carcass, excavated here by Sergey Gorbunov, suggests that ancient people butchered it about 45,000 years ago.
(Image: © Pitulko et al., Science (2016))

The slashed and punctured bones of a woolly mammoth suggest that humans lived in the far northern reaches of Siberia earlier than scientists had previously thought, a new study finds.

Before the surprising discovery, researchers thought that humans lived in the freezing Siberian Arctic no earlier than about 30,000 to 35,000 years ago. Now, the newly studied mammoth carcass suggests that people lived in the area, where they butchered the likes of this giant animal about 45,000 years ago.

"We now have an enormous extension of the space that was inhabited at 45,000 years ago," said Vladimir Pitulko, a senior research scientist at the Russian Academy of Sciences and co-lead researcher on the study. [Image Gallery: Stunning Mammoth Unearthed]

Paleolithic human remains are rarely found in the Eurasian Arctic. But all expectations were overturned in 2012, when a team found the carcass of an "exceptionally complete" woolly mammoth on the eastern shore of Yenisei Bay, located in the central Siberian Arctic, the researchers wrote in the study.

The extreme cold preserved some of the male mammoth's soft tissue, including the remains of its fat hump and its penis, they said.

However, injuries found on the mammoth's bones — including its ribs, left shoulder bone, right tusk and cheekbone — suggest that it had a violent end. Some of the bones have dents and punctures, possibly from thrusting spears, the researchers said.

"[These injuries] are clearly related to the death of the animal, which was killed and then partly butchered," Pitulko said in a statement he emailed to journalists.

The ancient hunters likely removed the mammoth's tongue and some of its internal organs, but it's unclear why they didn't take more of the beast.

"Maybe some obstacle appeared and prevented them from returning — who knows?" Pitulko told Live Science.

Using radiocarbon dating, the researchers dated the mammoth's tibia (shinbone) and surrounding materials to about 45,000 years ago. Radiocarbon dating measures the amount of carbon-14 (a carbon isotope, or variant with a different number of neutrons in its nucleus) left in a once-living organism, and can be used reliably to date material to about 50,000 years ago, although some techniques allow researchers to date older organic objects.

The researchers also found a Pleistocene wolf humerus (arm bone) that had been injured by a "sharp implement with a conical tip," Pitulko said in the statement. The bone, also discovered in Arctic Siberia, dates to about 47,000 years ago, they found.

The wolf bone was uncovered near the bones of ancient bison, reindeer and rhinoceros, all of which have evidence of human modification. This finding suggests that ancient humans hunted and ate a variety of mammals, not just mammoths, Pitulko said. [In Images: Ancient Beasts of the Arctic]

The hunters who butchered the mammoth and wolf were far from the Bering Land Bridge, which lay exposed at that time. However, perhaps their advanced hunting knowledge helped them survive in the Arctic. It may have also helped those who crossed the land bridge survive the journey, Pitulko said.

The new study is "splendidly done," said Ross MacPhee, a curator of mammalogy at the American Museum of Natural History in New York City, who was not involved in the new research.

If the mammoth had sustained just one wound, it would have been harder to say it was caused by humans, MacPhee said. For instance, the damaged tusk could be the result of daily mammoth living, he said.

"[But] there's not just the one wound; there's lots of them, and they're quite convincing," MacPhee said.

He added that the mammoth finding is "another nail in the coffin that people exclusively caused the extinctions of these megabeasts."

If people have been hunting mammoths since 45,000 years ago, they would have needed to quickly overhunt them to kill off the mammoths; otherwise, the giants would have likely had enough individuals to continue breeding, MacPhee said.

The study was published online yesterday (Jan. 14) in the journal Science.