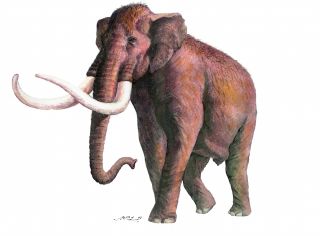 The famous Columbian mammoth — an 11-ton creature known for traversing North America during the last ice age — might actually be the same species as the Eurasian steppe mammoth, a new study finds.

The discovery suggests that the first mammoth to enter North America was the Eurasian steppe mammoth, and not its ancestor, a European creature called Mammuthus meridionalis. The two species differed greatly — the steppe mammoth had many more adaptations to living in cold weather.

The finding helps to rewrite the story of the evolution of the mammoth in North America, said study co-researcher Adrian Lister, a research leader of paleontology at the Natural History Museum in London. [Image Gallery: Stunning Mammoth Unearthed]

But to understand the latest development, it's important to explain the history of mammoth evolution, Lister said. Mammoths first emerged in Africa about 5 million years ago and moved into Europe about 3 million years ago, before spreading across Asia. When the mammoths first reached Eurasia, they were "still a forest-living, warm-climate kind of elephant species," Lister told Live Science. "And then, through about 2 [million] or 3 million years of evolution, they turned into the familiar woolly mammoth of the ice age."

However, earlier research suggests that one of these warm-climate mammoths, the European Mammuthus meridionalis, made the long trek across the Bering Strait land bridge about 1.5 million years ago. It was thought that once it reached North America, the behemoth gave rise to the famous Columbian mammoth (Mammuthus columbi), which had a stomping ground that ranged from Canada to central Mexico, Lister said.

But these teeth may simply look less developed because they are worn down from chewing, and were likely more complex in the mammoth's youth, Lister said.

The fossil record seems to support this idea. There are no known fossils belonging to the European mammoth in northeast Siberia or Alaska, "suggesting that this temperate-adapted species never dispersed as far north as the Beringian transit route," the researchers wrote in the study.

Moreover, after a recent trip in which he analyzed hundreds of mammoth specimens (mostly teeth) in museums across the United States, Lister came to the realization that the steppe and the Columbian mammoth are likely the same species. [Photos: A 40,000-Year-Old Mammoth Autopsy]

"When we compared these steppe mammoths from Asia with the American Columbian mammoth, we found that they were virtually identical," Lister said. "The new idea is that this advanced mammoth actually evolved in Siberia and just moved over to North America, where it's called the Columbian mammoth, but it's really more of the same thing."

This is a very "embarrassing name" for European scientists, who are used to calling it Mammuthus trogontherii, Lister said, laughing. Only time will tell how long that change will take, he said.

The researchers also reported that the Eurasian woolly mammoth (Mammuthus primigenius) later followed the steppe/Columbian mammoth into North America, but lived farther north, in the colder areas of southern Canada and the northern continental United States. However, the Eurasian woolly mammoth's range overlapped with its relatives, likely leading to interbreeding that birthed hybrid species, including Mammuthus jeffersonii, Lister said.

The study presents a compelling case that the steppe/Columbian mammoth was the first to reach North America, said Daniel Fisher, a University of Michigan paleontologist who was not involved in the new study.

However, it's impossible to say whether the worn-down teeth belong to an earlier or more advanced species, simply because there are few identifying characteristics on them, Fisher said. "[But] I'm happy enough to take this as the best statement, the best call of what is probably going on," he said.

Lister co-authored the study with Andrei Sher, a paleontologist with the Severtsov Institute of Ecology and Evolution in Moscow, who died in 2007 before the study's completion. The findings were published online today (Nov. 12) in the journal Science.