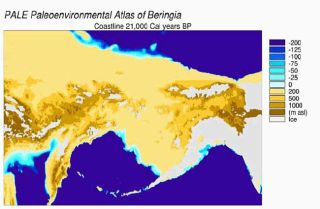 A view of the Bering Strait land bridge, as it would have appeared about 21,000 years ago. Humans probably migrated across the temporary link to the New World, recent genetic evidence suggests.
(Image: © NOAA)

The ancestors of Native Americans may have lived on and around the Bering Strait for about 10,000 years before streaming into the Americas, researchers argue.

In the new Perspectives article, published today (Feb. 27) in the journal Science, the researchers compile existing data to support the idea, known as the Beringia standstill hypothesis.

Among that evidence is genetic data showing that founding populations of Native Americans diverged from their Asian ancestors more than 25,000 years ago. In addition, land in the region of the Bering Strait teemed with grasses to support big game (for food) and woody shrubs to burn in the cold climate, supporting a hard-scrabble existence for ancient people. [In Images: Ancient Beasts of the Arctic]

Given the hypothesis, archaeologists should look in regions of Alaska and the Russian Far East for traces of these ancient people's settlements, the authors argue.

A dominant theory suggests the ancestors of Native Americans crossed the Bering Strait about 15,000 years ago and quickly colonized North America, and then South America.

But in 2007, genetics researchers found that almost all Native Americans in North and South America shared genetic mutations in their mitochondrial DNA, which is the genetic information that's carried in the cytoplasm of the egg and passed on through the maternal line. None of the mutations show up in Asian populations from which the Native American ancestors diverged, said study co-author John Hoffecker, an archaeologist and paleoecologist at the University of Colorado, Boulder. (Genetic evidence also suggests that some northern populations, such as the Inuit, likely came over in a second wave separate from the ancestors of Native Americans.)

Given the rate at which such mutations occur, the findings suggested a single Native American founding population must have been isolated from its Asian ancestors for thousands of years before dispersing throughout the Americas.

Other evidence fits the genetic data. Between 28,000 and 18,000 years ago, glaciers covered much of the Americas and northern Asia, blocking human migration into North America.

But in the 1930s, Swedish botanist Eric Hultén proposed that the region known as Beringia, which includes the land bridge now submerged under the Bering Strait, was a refuge for shrubby tundra plants. Pollen, insects and other plant remains taken from sediments beneath the Bering Sea confirmed this picture. [Photos: Amazing Creatures of the Bering Sea]

The outer portions of Beringia, in what is now Alaska and the Russian Far East, were likely drier grassland steppes where woolly mammoths, saber-toothed tigers and other big game grazed, Hoffecker said.

This region would have had two crucial resources that other Arctic areas didn't: woody plants to start fires and animals to hunt, Hoffecker said.

"The central part of Beringia was probably the mildest, most comfortable place to live at high latitudes during the last glacial maximum," Hoffecker told Live Science. "It's the most logical place for a group of people to hunker down."

Once the glaciers melted, only then did the Beringian inhabitants stream into North America, traveling along the coastline and into the interior through ice-free passageways, Hoffecker said.

While it's possible that the ancestors of Native Americans were isolated in Beringia for 10,000 years, the standstill hypothesis is hobbled by one detail: a lack of archaeological evidence prior to 15,000 years ago, said David Meltzer, an anthropologist at Southern Methodist University in Dallas, who was not an author on the new paper.

Some of the archaeological sites would have been washed away as the Bering Strait flooded, but "at least half of Beringia is still above water, so where are the sites?" Meltzer told Live Science. "If people were there for 10,000 years, you'd surely see evidence for them by now."

But the hypothesis is still compelling, said G. Richard Scott, an anthropologist at the University of Nevada, Reno, who was not involved in the work.

"The best explanation for why American Indians are so radically different from northeast Asians is that they just didn't stream over in the late Pleistocene [epoch]; they were stuck up there in the Arctic for maybe 10,000 or 15,000 years," Scott said.

The paper gives archaeologists an impetus to look for the potential lost sites of this occupation in Russia and Alaska, he added.