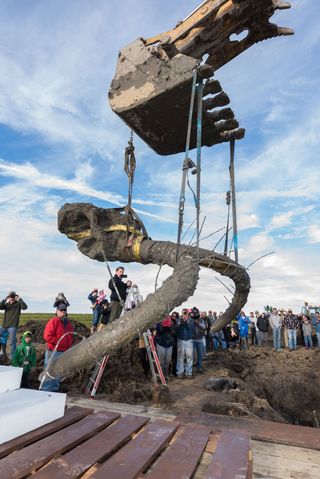 A mammoth skull and tusks are lifted from the ground at a farm southwest of Ann Arbor, at an unincorporated site in Washtenaw County, Michigan.
(Image: © Daryl Marshke | Michigan Photography)

Two Michigan farmers made an unexpected discovery in a wheat field last week: the ice-age bones of a mammoth that was likely slaughtered by ancient humans.

An excavation and analysis of the bones suggest they come from an adult male mammoth that had an unlucky end.

"We think that humans were here and may have butchered and stashed the meat [in a pond] so that they could come back later for it," Daniel Fisher, a University of Michigan paleontologist who led the excavation, said in a statement.

Once researchers date the bones, the discovery may help determine when early humans lived in the area, Fisher said. [See Photos of the Mammoth Unearthed in Michigan]

Farmer and property owner James Bristle found the mammoth on Sept. 28 while he was installing a drainage pipe at his farm near Ann Arbor with his neighbor Trent Satterthwaite, according to the Detroit Free Press. As Bristle dug a trench with a backhoe, he uncovered a bone about 3 feet (1 meter) long, which researchers later recognized as part of a mammoth pelvis.

"We didn't know what it was, but we knew it was certainly a lot bigger than a cow bone," Bristle said in the statement.

Bristle contacted the University of Michigan, and soon had a team of about 15 paleontologists and university students excavating the bones. However, the farming season is busy, so Bristle could only give the scientists one day to uncover the bones.

The paleontologists got right to work. They uncovered about 20 percent of the mammoth's bones, including the skull and two tusks, multiple vertebrae and ribs, the pelvis, and both shoulder blades. They estimate the mammoth likely lived 11,700 to 15,000 years ago, but the remains still have to be dated, Fisher said.

Other bones, such as the feet, are missing, and it's unclear what happened to them — for instance, they could be buried somewhere else, or maybe ancient humans removed them, Fisher said.

As the team excavated the bones, they noticed "excellent evidence of human activity" associated with the mammoth remains, Fisher said. Ancient humans didn't have refrigerators, of course, so it's possible they stored the mammoth's carcass in a pond for safekeeping, he said. Fisher has encountered this "pond strategy" at other sites in the region, he noted.

The team also found three basketball-size boulders next to the mammoth's bones. Perhaps ancient people placed these boulders on the mammoth to weigh down the creature's remains in the pond, Fisher said.

Moreover, the researchers also found a small stone flake near one of the tusks. Ancient people may have used the stone flake as a cutting tool, Fisher said. The neck vertebrae are also arranged in anatomical sequence, almost as if someone had "chopped a big chunk out of the body and placed it in the pond for storage," Fisher said. (If the mammoth had died naturally, its vertebrae would be scattered randomly, he said.) [Image Gallery: Stunning Mammoth Unearthed]

The scientists plan to wash the bones and look for cut marks, which would support their hypothesis that humans butchered and stored the animal, Fisher said. An analysis may also determine whether it is a woolly mammoth or a "Jeffersonian mammoth," which is a hybrid between a woolly mammoth and a Columbian mammoth, Fisher told the Detroit Free Press.

The new finding is one of about 300 mammoths and 30 mastodons discovered in Michigan, Fisher said. These prehistoric creatures once roamed North America, before going extinct about 11,700 years ago.

Bristle said the discovery may have interrupted his farming work, but the excavation was worth it in the end.

"When my 5-year-old grandson came over and saw the pelvis, he just stood there with his jaw wide open and stared. He was in awe," Bristle said. "So I think this was the right thing to do."