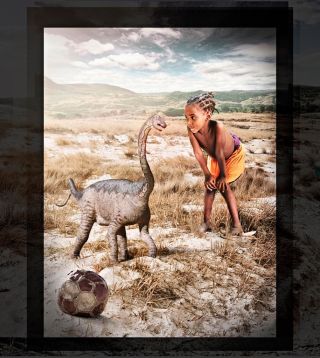 The baby Rapetosaurus krausei lived about 67 million years ago, but this image shows just how small the dinosaur would have been compared to a modern girl. It hatched from an egg no larger than a soccer ball.
(Image: © Tyler Keillor, Anthony Morrow and Ella Glass)

About 67 million years ago, a baby sauropod dinosaur with a long skinny neck, a slender tail and a little head died of starvation during a prehistoric drought.

Now, the discovery of the animal's fossilized bones suggests that the family of ginormous dinosaurs that this titanosaur belonged to started out small — each about the size of a Chihuahua — and were precocial, a new study finds. Precocial means they didn't need much parental care after they hatched from their eggs.

"Baby Rapetosaurus gives us our first in-depth look at a sauropod within just a few weeks of hatching," said study lead researcher Kristina Curry Rogers, an associate professor of biology and geology at Macalester College in Minnesota. [In Images: A Baby Dinosaur Unearthed]

Other researchers unearthed the baby's fossilized bones in Madagascar during several excavations in the late 1990s and early 2000s. But these bones sat in storage for many years, until researchers looking for other bones in the excavated samples serendipitously came across the baby dino's fossils.

"That's where I found them several years ago, when I was searching for bones of ancient crocodiles and turtles," Curry Rogers told Live Science in an email. "They were instantly recognizable as Rapetosaurus to me because I've spent years studying Rapetosaurus and other titanosaurs."

The fossils indicate that the baby dinosaur stood about 14 inches (35 centimeters) tall at its hips and weighed about 88 lbs. (40 kilograms), about as much as a golden retriever, Curry Rogers said. But at 11 percent the body size of the largest-known Rapetosaurus krausei, the baby basically looks like a mini version of its gigantic parents, Curry Rogers said.

These similar proportions are actually a big finding, she said. The researchers noticed that the baby Rapetosaurus has the same basic limb-bone dimensions as juvenile, subadult and adult Rapetosaurus dinosaurs. This growth pattern, called isometry, happens when shapes stay consistent throughout the growth history of an animal, she said.

"This is a clue that Rapetosaurus was precocial and that as a baby, its skeleton allowed it far more mobility than when it was a massive adult," Curry Rogers told Live Science. "The bones of babies were already prepared for the huge masses they'd eventually support."

Microscopic analyses and X-ray computed tomography (CT) scans showed the baby was growing fast, at about the same rate as elephants and other modern big mammals, the researchers found.

"From it, we can tell a lot: The individual was only several weeks old when it died, and in its short lifetime it grew to be 10 times its weight," study co-author Michael D'Emic, an assistant professor in the Department of Biology at Adelphi University in Garden City, New York, said in a statement.

Despite the animal's young age, the bones were already remodeling themselves, a signal that they were responding to the weight of the baby dinosaur walking around, Curry Rogers said.

Moreover, "the preserved cartilages at the ends of long bones were very thin, as they are in precocial animals that don't require a lot of post-hatching parental care, and had a distinctive structure that signals starvation in living animals," Curry Rogers said. [Image Gallery: Dinosaur Daycare]

Intriguingly, the researchers detected a hatching line, a zone deep inside the bones that records subtle changes in growth after hatching. This allowed the scientists to estimate that, at birth, the little tyke was 7.8 inches (20 cm) tall at its hip, and likely weighed about 7.5 lbs. (3.4 kg), about as much as a Chihuahua, Curry Rogers said.

During its short life, the baby was likely highly mobile, spending its days foraging, sleeping and evading predators during the Late Cretaceous.

The study will be published on Friday (April 22) in the journal Science.