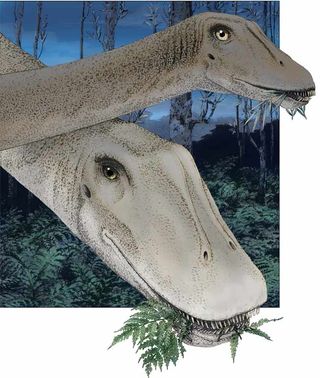 The skull of a juvenile plant-eating dinosaur called Diplodocus, illustrates that some sauropod species went through drastic changes in skull shape during normal growth. Here an illustration shows a juvenile dinosaur (with a narrower snout) eating alongside an adult Diplodocus.
(Image: © Mark A Klingler / Carnegie Museum of Natural History.)

Like most baby animals, some dinosaur tots had proportionally larger eyes and smaller faces than their parents. New research on the skull of a juvenile plant-eating dinosaur suggests it was baby-faced, too.

The skull, which belonged to a sauropod dinosaur called Diplodocus, was rediscovered in the collections of Pittsburgh's Carnegie Museum of Natural History. Unlike the dinosaur's elders, this one had a drastically different skull shape, the researchers found.

Until now, scientists had based their ideas about sauropod skulls on adults, as juvenile skulls are extremely rare, University of Michigan paleontologist John Whitlock said in a statement this week.

Whitlock and U-M colleague Jeffrey Wilson, along with Matthew Lamanna from the Carnegie Museum, describe the finding in the March issue of the Journal of Vertebrate Paleontology.

Diplodocus adults were giants, reaching some 85 feet (26 meters) in length and weighing a scale-tipping 22,000 pounds (10 tons). The adults had unusual skulls to begin with, sporting long, square snouts, unlike the rounded or pointed ones on other sauropod dinosaurs.

"Up until now, we assumed juveniles did too," said Wilson, an assistant professor in U-M's Department of Geological Sciences and an assistant curator at the U-M Museum of Paleontology.

Instead, the juvenile's skull was different from adults, with a snout that was quite pointed.

"Although this skull is plainly that of a juvenile Diplodocus, in many ways it is quite different from those of the adults," said Whitlock, a doctoral candidate in the U-M Museum of Paleontology. "What was unexpected was the shape of the snout — it appears to have been quite pointed, rather than square like the adults. This gives us a whole new perspective on what these animals may have looked like at different points in their lives."

The small Diplodocus skull, however, suggests that major changes occurred in the skull throughout the animal's life.

The researchers suspect the skull-shape changes might have been tied to feeding behavior, with adults and juvenile dinosaurs eating different foods to avoid competition. Young Diplodocus, with their narrower snouts, perhaps were choosier browsers, selecting high-quality plant parts.

The actual juvenile Diplodocus skull, as well as a fully restored, mounted skeleton of an adult, is on display in Carnegie Museum of Natural History's "Dinosaurs in Their Time" exhibition.

Funding was provided by the U-M Department of Geological Sciences and the Geological Society of America.