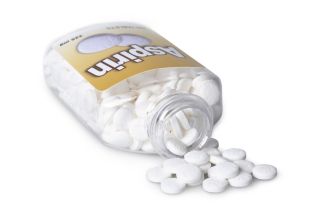 In the study, researchers found that people who regularly took aspirin had a nearly 34 percent lower risk of a type of brain tumor called a glioma, compared with people who didn't take aspirin regularly.

This is not the first study to look at the link between over-the-counter pain relievers and brain cancer risk. However, the results of previous studies have been inconsistent, according to the researchers, who presented their new findings today (April 19), here at the American Association for Cancer Research's annual meeting.

Indeed, the type of brain tumor the researchers focused on in this study can be difficult to study because it's relatively rare, said Dr. Rose Lai, an associate professor of neurology at the University of Southern California and the lead author of the study. Previous studies have had very few participants, she said.

The new study is one of the largest done to date on gliomas, Lai told Live Science.

In the study, the researchers compared about 4,000 patients with gliomas to an equal number of healthy people. Using questionnaires, the researchers gathered data on each person's history of pain-reliever use. [5 Surprising Facts About Pain]

The researchers found that the longer a person reported taking aspirin regularly, the lower their risk of having a glioma, Lai said. The observed effects were similar to those seen in studies looking at aspirin use and colon cancer risk, she said. In those cases, it often takes time for the effects to "kick in," she said.

Although the researchers did not explore any potential mechanisms for how aspirin may reduce a person's risk of glioma in the new study, many other studies have looked at this topic, Lai said.

Aspirin works, in part, as an anti-inflammatory drug, and it blocks a compound in the body called COX-2, which is linked to inflammation. Scientists have shown, however, that COX-2 may also play a role in gliomas, Lai said. For example, studies have shown that the more advanced a glioma is, the more COX-2 is found in it, she said. In addition, COX-2 may help promote tumor growth by helping blood vessels grow (to supply the tumor with oxygen and nutrients) and by helping it avoid detection by the immune system, she said.

Moreover, studies in animals have shown that aspirin can prevent the development of gliomas, Lai said.

The researchers also looked at other over-the-counter pain relievers including ibuprofen and naproxen, but did not find a significant relationship between these drugs and people's risk of gliomas. [10 Things You Didn't Know About the Brain]

Lai noted that the drugs other than aspirin were more difficult to study, because unlike aspirin — which is often taken daily by people with a higher risk of heart disease — other pain relievers are taken more sporadically (for example, when someone has an ache or a injury).

One limitation of the new study was that the participants were asked to recall their pain reliever use, and they could have made mistakes.

And while the researchers did find a strong association between aspirin and glioma risk, there is a lot more work to be done, Lai said.