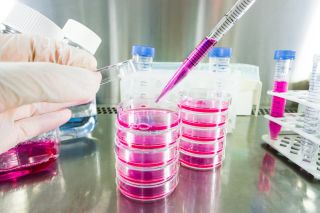 Many cancer cells can divide indefinitely by flicking on an "immortality switch," a trick most other cell types can't perform. Now, researchers have discovered a way to short-circuit that switch, which may slow or halt the spread of more than 50 types of cancer, including the kind of brain cancer that Sen. John McCain died from last month.

In the new study, researchers examined glioblastoma brain cancer cells that had been removed from cancer patients, finding that a tiny segment of a common protein called GABP was the key in enabling cancer cells to activate the so-called immortality switch. When the researchers removed that protein segment, the cancer cells — both in lab dishes and when transplanted into mice — stopped their voracious multiplying and behaved like mere-mortal cells. [10 Do's and Don'ts to Reduce Your Risk of Cancer]

The researchers, led by Joseph Costello, a professor of neurosurgery and a neuro-oncology expert at the University of California, San Francisco, said they hope to develop a drug that could inhibit just that tiny segment of GABP, depriving cancer cells of their key to the switch while avoiding harming other cells. (Costello disclosed in the study that he and a co-author are founders of Telo Therapeutics, which is partnering with the pharmaceutical company GlaxoSmithKline to search for small molecules that have potential as drugs.)

The findings were published today (Sept. 10) in the journal Cancer Cell.

A signature of cancer cells is their ability to divide unchecked. Almost all other cells can divide only a set number of times before they die. The main exceptions are stem cells, which can divide throughout an organism's lifetime to replenish all those other cells that are dying, such as blood and skin cells.

Cellular life spans are set by structures called telomeres, which cap the ends of chromosomes, serving like aglets on a shoelace. With each cell division, the telomeres get a little shorter, until, eventually, they are too short to protect the integrity of the chromosomes. That's when cell division stops.

Stem cells escape this mortality by using telomerase, an enzyme that rebuilds the telomere. In an indirect way, many cancer cells do much the same thing, by exploiting mutations in a gene called TERT, short for telomerase reverse transcriptase. Cancer cells that can switch on this gene can, like stem cells, divide indefinitely.

Scientists have understood cancer's use of the immortality switch for years. Previous research has found that more than 90 percent of tumors have mutations that enable the growths to turn on TERT expression and produce telomerase. But cancer drugs that simply block telomerase have proven to be too toxic for patients, because the medicines choke stem cells, too, limiting a patient's ability to produce new blood cells and other vital cells.

Focusing on glioblastoma, the most aggressive form of brain cancer, Costello's group discovered a way to limit access to the immortality switch only for cancer cells, sparing stem cells. Specifically, the researchers found that cancer cells were using a part of the GABP protein, called GABPbeta1L, to activate the switch.

The GABP protein is used by many types of cells for a multitude of tasks, so inhibiting this protein entirely would have adverse effects throughout the body. The researchers instead experimented with removing only the GABPbeta1L element, using the gene-editing tool CRISPR to do so.

And it worked. The GABP protein lacking beta1L had a detrimental effect on cancer cells but no effect on other cells, according to experiments the researchers did in lab dishes and in mice.

"These findings suggest that the beta1L subunit is a promising new drug target for aggressive glioblastoma and potentially the many other cancers with TERT promoter mutations," Costello said in a press statement.

McCain and former Vice President Joe Biden's son Beau Biden both died from glioblastomas. Although it is not publicly known whether their form of glioblastoma had TERT promoter mutations, Costello told Live Science it was probable, given that an estimated 83 percent of glioblastomas have such mutations. [5 Facts About Brain Cancer]

Dr. John Laterra, co-leader of the Brain Cancer Program at the Johns Hopkins Sidney Kimmel Comprehensive Cancer Center in Baltimore, who was not part of this research, said the findings "are of high potential significance given the known role of TERT in driving cancer cell immortality and glioma malignancy.

"The findings provide a compelling argument for future work directed at identifying [molecules] that inhibit GABPbeta1L or other regulators of" GAPB's ability to activate the immortality switch, Laterra told Live Science.

He added that it will be important to replicate this experiment in other tumor models, preferably those derived directly from patient samples. Also, although the cancer cells already deficient in GABPbeta1L grew less aggressively after transplantation into mice, more work in mice is necessary, Laterra said. Researchers need to design an experiment to determine if cancer that has already developed in mice can be stopped by blocking or removing GABPbeta1L, he said.

Costello said his group and other collaborators will pursue two approaches in parallel: the creation of a small-molecule drug that targets GABPbeta1L and the development of a CRISPR-based therapy that can alter human genes so they will not produce GABPbeta1L. The CRISPR approach was done for the human brain cancer cells transplanted into mice in this experiment. The researchers are working with GSK on the former project. Both approaches are highly experimental, though, and will take several years to develop, Costello told Live Science.