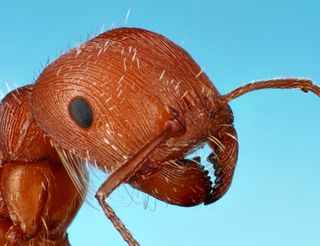 A new photography initiative is building a collection of high-resolution insect images and placing them online for anyone to download and use for free.

The project, named "Insects Unlocked," was launched in the summer of 2015 under the supervision of Alex Wild, a curator of entomology at the University of Texas at Austin (UTA). Wild, a photographer and writer as well as an entomologist, has long championed the importance of photography's role in science communication and outreach.

With UTA's support, Insects Unlocked involves students and curators in learning and mastering the use of professional photographic equipment to create public-domain images of a range of insects — and spiders, too — in the field and in curated collections. [In Photos: 'Insects Unlocked' Collection Shares Free Insect Images]

One of the project's goals is to represent the diversity of "Texas' smallest wildlife," said a statement on the project's fundraising page.

The high-resolution photos are released into the public domain, which means they are available for anyone to use at no charge and for any purpose — personal, educational or commercial — without permission or attribution required.

Many of photographs' insect subjects reside in the University of Texas Insect Collection, Wild told Live Science in an email. The collection holds between 1 million and 2 million specimens, focusing on species that are native to Texas and Mexico.

Wild, whose work as an entomologist explores ant evolution and taxonomy, began photographing insects more than a decade ago, and writes about insect photography for Scientific American. He built the imaging system that the Insects Unlocked group uses for the UTA insect collection. That group currently involves about 10 people, a mix of students at UTA and people in the larger Austin, Texas, community.

Response to the initiative has been very encouraging, Wild said, with Insects Unlocked images appearing in a number of different outlets: journal covers, news stories, Wikipedia pages, classroom presentations and corporate websites, to name a few.

Insects Unlocked benefits the student photographers as well, imparting skills that can be applied to the students' future scientific efforts in species identification, collection and curation, Wild said.

"Visual art skills are an extremely valuable asset for scientists," Wild told Live Science. "And in that vein, I see the primary benefit of Insects Unlocked is to provide young scientists with training they might not otherwise receive.

"Of course, the free images that come out the other end are also useful," he added.