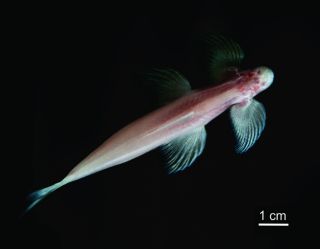 When the first water-dwelling creature wriggled up onto land about 400 million years ago, it took the first steps down an evolutionary path that would eventually lead to a diverse range of tetrapods — animals with backbones and four limbs — that navigate the world in a number of ways.

Now, scientists have discovered a blind cave-dwelling fish that "walks" around its rocky home, shuffling forward by shifting its pelvis back and forth in a way that is unique among fish alive today, but recalls adaptations that may have once allowed ancient fish to transition from water to land, hundreds of millions of years ago.

This is the first evidence in a living animal that offers a real-time glimpse of the mechanisms that may have served as the evolutionary foundation for all the different ways that four-limbed animals glide, fly, swim, creep and gallop — today, and throughout their evolutionary history. [Watch: Pelvic 'Boogie' Moves Blind Cavefish]

These hips are made for walkin'

Brooke Flammang, the study's lead author, got her first look at the unusual fish thanks to a colleague across the hall — a cavefish biologist who had recently returned from an expedition to Thailand. Flammang told Live Science that Daphne Soares — her co-author of the new study — had captured video footage of "this crazy walking behavior" in one isolated cave system.

"She just walked into my office and said, 'I have to show you this,'" said Flammang, an assistant professor in the Federated Department of Biological Sciences at the New Jersey Institute of Technology (NJIT). "And I couldn't believe it. I'd never seen anything like it before."

The fish, which had no eyes, lived in complete darkness, inhabiting networks of small, fast-moving river systems that flowed over steep and slippery rocks, sometimes at depths of only 0.4 inches (1 centimeter). They seemed to shun the still, calm pools of water, and were more likely to be found trekking up the steep rocks, Soares had discovered.

Using their pelvises, the fish in the clips generated a rigidly rocking momentum that carried them forward through powerful water flows and over rocks covered by just a thin layer of water. Their movements — the diagonal opposition, in particular — were reminiscent of how limbs work in tetrapods, the study authors wrote. That kind of motion was noticeably different from the wriggling that fish such as mudskippers and walking catfish use to move temporarily on land, in which their tails and posteriors do most of the work, or the fin-propelled "walking" that frogfish and lungfish use underwater.

Flammang, who studies how physics interacts with biology in bodies — particularly fish bodies — realized right away she was looking at something extraordinary. But it wasn't until she was able to analyze computed X-ray tomography (CT) scans of the cavefish provided by study co-author Apinun Suvarnaraksha at Maejo University in Thailand that she could piece together the structure of the fish's pelvis to understand what it was doing. She used the CT scans to build 3D models of the fish's skeleton. [In Images: The Extraordinary Evolution of 'Blind' Cavefish]

That's when things really got interesting.

"If you had shown me these files and hadn't told me that it was a fish, I would have immediately assumed it was a tetrapod," Flammang said, "because of all the characteristics that is has that are specifically good at holding up organisms' weight against the forces of gravity."

Flammang explained that the cavefish had robust pelvic structures and stiff supports between their vertebrae that locked the backbones together — features common to tetrapods. "But they're the exact opposite of what you'd expect to find in fish," she said, "because fish need to be able to undulate their bodies."

"When you define what a tetrapod is, one of the characteristics that you use is these interlocking supports among the vertebrae to support their body weight against gravity," Flammang said, "As well as having a robust pelvis so that it can transfer forces from the body toward the ground without crumpling."

Why the fish are rock-climbing at all is still a mystery — for now, at least — though Flammang suggested that they might be following a chemical sensory trail related to food or mating. Likely a number of factors contributed to this fishy adaptation, Flammang said, but that's one of the things that makes studying fish in particular so fascinating.

"Out of 35,000 species there are so many morphological differences among them that give them some sort of advantage that might be selected for," she told Live Science. "You look at their fins — they're all somewhat different, and they all do different things with them."

As far as this particular cavefish is concerned, further studies will investigate the role that its soft tissues — the muscles in particular — play in locomotion, along with its ecology, and how the fish senses and interacts with its environment. And studying a living fish that can walk could reveal much to scientists about the earliest stages of tetrapod evolution.

"Every time we look at it we see something new," Flammang said. "The questions are endless, at this point."

The findings were published online March 24 in the journal Scientific Reports.