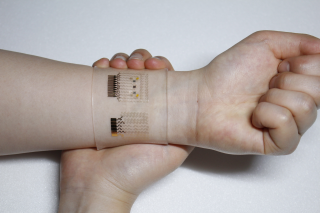 A stick-on patch that tracks, and even regulates, blood sugar levels could be used by people with diabetes one day, according to a new study.

The researchers also showed that the patch can deliver the diabetes drug metformin through the skin and that it can reduce high blood glucose levels in mice with diabetes.

The researchers are very interested in making the patch commercially available, and are talking about it with several companies in Korea, said study co-author Hyunjae Lee, of the Institute for Basic Science in Seoul, South Korea.

But more research is needed before the patch can be used in people with diabetes, the researchers said. [Why Is Too Much Sugar Bad for You?]

Scientists have been looking for a noninvasive way to monitor the levels of glucose in people with diabetes, because finger pricking can be painful and some patients are unwilling to do it, the researchers said.

To make the new patch, the researchers combined gold particles and graphene  — a type of material that shows promise for use in wearable electronics because it is flexible, and can be transparent, soft and very thin, the researchers said.

The patch consists of wearable sensors that detect the levels of glucose in sweat, as well as an integrated system with micro-needles that deliver the glucose-regulating drug metformin. When the sensors detect a high level of glucose in the sweat, heaters embedded in the patch prompt the micro-needles to release the drug and lower the glucose level.

However, the drug-delivery system in the patch needs to be improved further before it can be tested in human patients with diabetes, the researchers said in the new study, published today (March 21) in the journal Nature Nanotechnology.

"Some important questions still need to be answered before the technology can be translated into practical use," Richard Guy, a professor of pharmaceutical sciences at the University of Bath in the United Kingdom, wrote in an editorial accompanying the new study in the journal.

For example, it is not clear whether the glucose-detecting sensors would work continuously for long periods of time, or whether the patch would work well if the wearer sweated a lot due to exercise, said Guy, who was not involved in the new study.