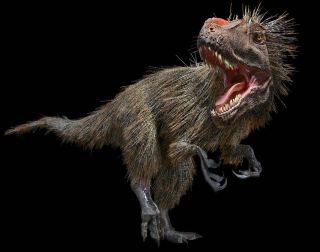 The asteroid that slammed into Earth 65.5 million years ago killed most, but not all, of the dinosaurs. Those that survived were a feathered lot, and they're still around today, a new exhibit at the American Museum of Natural History (AMNH) in New York City reveals.

The exhibit "Dinosaurs Among Us" opens Monday (March 21), and walks guests through the myriad evidence — including nesting behavior similarities and feathered dinosaur findings — supporting the theory that dinosaurs evolved into birds.

"With this new exhibition, we invite visitors to question what they think they know about dinosaurs — how they looked and behaved and even whether all of them actually became extinct," Ellen Futter, president of the AMNH, said in a statement. [Photos: Birds Evolved from Dinosaurs, Museum Exhibit Shows]

The dinosaur-to-bird evolutionary concept isn't exactly new. Thomas Huxley, the English biologist known as "Darwin's bulldog," proposed the idea more than 150 years ago. But, in recent years, scientists have uncovered new fossils and developed cutting-edge techniques to study them.

Their research shows that the roughly 18,000 known species of birds belong to the group Dinosauria, which includes extinct dinosaurs and their living descendants. The similarities between birds and dinosaurs are apparent the moment guests walk into the exhibit.

Greeting museumgoers is the cast of an 80-million-year-old fossil of the oviraptorid dinosaur Citipati osmolskae sitting over the center of a nest, its forearms spread out to shield the eggs. The nesting dino is posed next to a photo of a modern-day falcon exhibiting the same behavior. The display highlights the fact that, like birds, some dinosaurs made nests, laid eggs and tended to their young; crocodiles, the cousins of dinosaurs and birds, do the same.

Fossils of feathers show another link between the birds and paleo-beasts. The early birds that first developed about 150 million years ago had feathers, but so did some nonavian dinosaurs. Most of these feathered, nonbird dinosaurs are theropods — a group of bipedal, mostly carnivorous dinosaurs that includes the species T. rex. Some theropods eventually evolved into birds, research shows.

There's also a likeness between bird and dinosaur brains and lungs. Despite the use of "bird brain" as a pitying insult, birds actually sport large brains for their body size. In fact, bird brains are six to 11 times larger than those of similar-size reptiles, according to AMNH.

Most of this increase in brain size is seen in the cerebellum, a part of the brain associated with learning. Computer tomography (CT) scans of dinosaur skulls show that some theropod skulls also have larger "thinking" brain regions compared other dinosaurs, suggesting that they were capable of advanced learning behavior, according to the exhibit.

Moreover, dinosaurs, crocodiles and birds all have powerful lungs. This suggests that the last common ancestor of the bunch, which lived more than 240 million years ago, probably did too, museum scientists said.

The exhibit points out innumerable other similarities — birds and dinosaurs share the same sleeping position — that is, "sitting on their folded hind limbs, forearms held close to the body and head tucked under one arm," according to the exhibit. Like modern birds, theropods also had hollow bones (it's hard to fly with heavy, dense bones), and other anatomical similarities, such as wishbones. [Images: These Downy Dinosaurs Sported Feathers]

"Birds are a kind of dinosaur, and they are still with us," Mark Norell, curator of "Dinosaurs Among Us," told reporters at the museum. "They're represented by at least 13,000 species alive today, which is almost 2.5 times as many as living mammals that are alive. So you could even argue that we still live in the age of dinosaurs."

The exhibit is the AMNH's second dinosaur show to open this year, following the unveiling of a 122-foot-long (37 meters) titanosaur in January. "Dinosaurs Among Us" will run until Jan. 2, 2017.