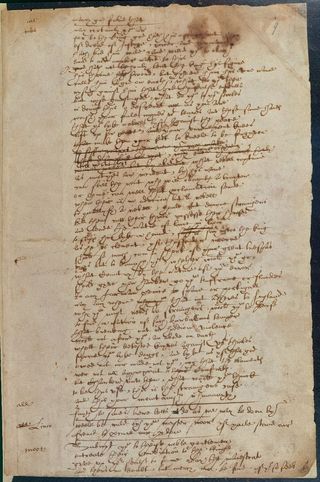 "The Booke of Thomas More," a play originally written before 1601 and extensively revised by a series of playwrights between 1603 and 1604, is believed to contain the only surviving copy of William Shakespeare's handwriting, in a powerful speech by the play's hero.
(Image: © British Library)

The only surviving copy of a play written in William Shakespeare's own handwriting is on display this month in Washington, D.C.

The mysterious play, called "The Booke of Thomas More," details the life and death of Henry VIII's Catholic advisor Thomas More, who was imprisoned in the Tower of London and ultimately executed in 1535 for refusing to acknowledge the legitimacy of the Church of England. (Henry VIII formed the Church of England in 1534 after the Catholic Church refused to nullify his more than two-decades-long marriage to Catherine of Aragon.)

The manuscript is on display, along with other rare writings from the Bard, in the "Shakespeare, Life of an Icon" exhibit at the Folger Shakespeare Library in the nation's capital. The folio is on loan from the British Library. [History's 10 Most Overlooked Mysteries]

The first version of the drama, which was originally written by Anthony Munday between 1596 and 1601, has been lost to the mists of time. However, Munday granted the rights for the play to be used as an official playbook for a theater company. From there, the courtier Edmund Tilney, who served as Master of the Revels (essentially the official court censor for Queen Elizabeth and King James), bought the rights to the play. Tilney took a red pen to the copy, highlighting the most politically sensitive scenes that needed to be excised or revised, according to a statement from the British Library.

From there, a series of playwrights, from Thomas Heywood to Shakespeare himself, undertook extensive rewrites of the play between 1603 and 1604. A copyist then had the Herculean task of taking the original, along with all the revisions, and turning it into a serviceable drama.

The final result is a hodgepodge of different authors' censorship, scribblings, notes and revisions.

The story opens with the Evil May Day Riots of 1517. Thomas More, who served as the under-sheriff of the city of London at the time, is shown quieting the riots led by nativists against French and Lombard immigrants to the area. Tilney, who lived in a time of economic upheaval, when hostilities towards aliens and strangers ran high, took issue with these scenes and ordered them removed altogether from the play.

Based on the language and style of the oratory, experts now believe the revised insurrection scene, which includes a powerful peacemaking speech by More, is the work of Shakespeare himself.

In the speech, More first expresses horror at the behavior of these rabble rousers, saying it is an insult to England's dignity, and to royal authority. He then enjoins the rioters to view these aliens as human beings who have suffered from discrimination. More raises the point that the rebels' violence could inspire others to seek violent resolutions to their conflicts, which would ultimately push society itself into disarray. Finally, More points out that since God himself bestowed authority on the King, breaking that law is sinning against God.

"To the king god hath his offyce lent  / of dread of Iustyce, power and Comaund / hath bid him rule, and willd you to obay," the Folio reads.

Despite being good drama, the speech is pure fiction, as armies led by the Earl of Shrewsbury and the Duke of Norfolk were truly responsible for quieting the riots, historians contend. Shakespeare fans who'd like to see the rare folio can visit the Folger Shakespeare Library until March 27, after which the trove of rare documents will return to the British Library.