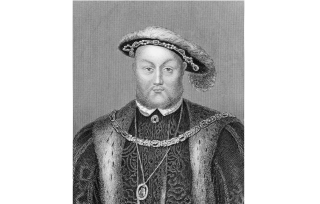 England's King Henry VIII is best known for his erratic and sometimes violent behavior — he married six times and had two of his wives beheaded, for example — and now, researchers say the Tudor king's brutal ways may have stemmed from brain injuries he got during several sporting accidents.

In the study, the researchers analyzed historical documents for reports of the king's health and behavior, up to his death, at age 55. [Inside the Brain: A Photo Journey Through Time]

They found that Henry experienced two severe blows to the head during jousting tournaments, including one instance in which his horse fell on him and he lost consciousness. In addition, he was reported to have fallen into a ditch once while hunting, the study said.

The historical documents also illustrate that Henry VIII experienced many of the symptoms associated with traumatic brain injuries, including memory problems, impulse control, headaches, insomnia and depression, the authors wrote.

"It is intriguing to think that modern European history may have changed forever because of a blow to the head," Dr. Arash Salardini, a behavioral neurologist at Yale University and the senior author on the study, said in a statement.

Indeed, the king was not always known for his anger problems; in his youth, he was considered much more even-tempered, according to the study.

"Historians have struggled to explain the transformation of Henry VIII of England from a vigorous, generous and intelligent youth to a cruel and petty tyrant in old age," the authors wrote in the study.

There's no doubt the king's health deteriorated over the course of his reign. As he was swapping out wives, he also experienced serious blood infections, skin infections and significant weight gain.

One estimate is that the king went from having a body mass index (BMI) of about 26 when he was in his 20s to a BMI of nearly 50 by the time he died, the researchers wrote in their study.

Other researchers have suggested several alternative hypotheses to explain Henry VIII's change in health and behavior. These ideas focus on the possibility that he had a condition that affected his hormones, such as Cushing syndrome, in which abnormally high amounts of cortisol lead to weight gain.

But Cushing syndrome makes less sense as an explanation now than it did in the 1930s, before scientists knew much about traumatic brain injuries, Salardini told Live Science.

In addition to the cognitive symptoms of traumatic brain injury, the researchers also noted in the new study that the king's head injuries could have led to hormonal problems. This could explain his weight gain and even sexual dysfunction, they wrote.

Because the effects of traumatic brain injury are cumulative, it's possible Henry VIII could have recovered a bit after his first two injuries, Salardini said. At that point, the king seemed to have milder symptoms, such as headaches, Salardini said.

For treatment, a Tudor physician — one with 21st-century knowledge, of course — could have discouraged the king from jousting, tried to improve his mood with herbal remedies and improved his sleep habits and diet, Salardini said.

But after the second jousting injury, in which Henry may have lost consciousness for about 2 hours, things would have been more difficult, Salardini said.

"As a clinician, I would have been most worried about [that] jousting accident," Salardini said.

The study was published Feb. 5 in the Journal of Clinical Neuroscience.