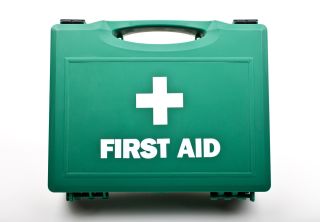 If a child passes out, parents can help them by performing a simple first-aid technique known as putting them in "the recovery position," a new study suggests.

Children in the study who became unconscious because they fainted or had a seizure — but were still breathing — and were placed in the recovery position were almost 30 percent less likely to be hospitalized compared with children whose parents did not perform this first-aid method, researchers in Europe found. The maneuver involves laying a child on his or her side with the head tipped slightly back, which helps to keep a child's airway open and allows fluids to drain from the mouth, preventing the child from choking, according to the study, published (Jan. 25) in the journal Archives of Disease in Childhood.

The finding shows that putting kids on their sides during a seizure really does help, and it works to keep kids from needing to be hospitalized, said Dr. David Mandelbaum, a pediatric neurologist at Hasbro Children's Hospital in Providence, Rhode Island, who was not involved in the research. Now, doctors can tell parents that this position greatly decreases the likelihood that complications will occur after a child loses consciousness, he added. [9 Weird Ways Kids Can Get Hurt]

Children who have seizures often vomit and have excessive amounts of saliva, Mandelbaum told Live Science. For those reasons, it's better for the child to be rolled on their side than to lie flat on their back, so these secretions will fall out of their mouth, he said.

Putting a child in the recovery position also likely improves a child's breathing, leading to a better recovery, the researchers said. But too few parents use the technique, and some perform inadequate maneuvers instead, they noted. Parents should never move or turn a child who may have a spinal cord injury, they noted.

Although Mandelbaum said that he does instruct parents to lay children on the floor when they're having a seizure — as well as to protect the child's head with a pillow, loosen tight clothing, roll the child on one side and never put things in a child's mouth — he said he was not familiar with the phrase "recovery position," and he doesn't necessarily refer to the position that way when he educates parents.

First-aid websites from Europe, Australia and Canada do refer to the technique as the "recovery position." To put a toddler or child in the recovery position, they recommend turning children to their left side, placing one of the child's hands under their cheek to prop up the head slightly and placing the other arm at a 90-degree angle. Once the child is on their side, bend their top (right) leg to prevent them from rolling over.

For infants, the recovery position is different. Parents should hold the baby face down in their arms, with the infant's head slightly lower than the rest of the body. In this position, the baby's head and neck are supported by the parent's hands, to keep the infant's mouth and nose clear.

In the new study, the researchers looked at 553 children who had been taken to the emergency room because of a loss of consciousness. Data was collected from interviews with parents in 11 different hospitals in six European countries.

The researchers found that only 26 percent of parents said they used the recovery position, which they learned about from doctors or during first-aid training.

Parents were more likely to report trying other techniques that they learned from other family members or the media to help revive their child. The findings showed that 17 percent of parents reported shaking their unconscious child, which doctors consider potentially dangerous, especially in infants younger than 1 year old, because it can lead to severe brain injuries.

Fourteen percent of parents said they put water on their child's face, 11 percent said they slapped the child and 7 percent blew on the child's face.

Slightly more than half of the children in the study who lost consciousness needed to be admitted to the hospital.

The study found a 10-fold reduction in hospitalization rates when the recovery position was performed on children younger than age 2.

The difference in hospital admission rates when the recovery position was done in kids under 2 was very high and really striking, Mandelbaum said.

One drawback of the study is that the researchers didn't say whether it was the first time a child had a seizure. Parents might not receive instructions about safely positioning their child during a seizure until after their child had the first one, and first-time seizures typically have higher hospitalization rates, Mandelbaum said. [Epilepsy: Symptoms and Treatment]

The results also don't tease out whether it was parents performing the recovery position that helped reduce hospital admission rates, or whether it was the firsthand experience of parents when it was not a child's first seizure that shaped a physician's comfort level and decision not to hospitalize a child, Mandelbaum said.