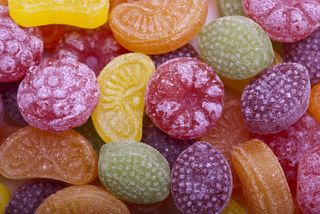 For kids, the food most likely to "go down the wrong pipe" and cause choking is hard candy, a new study finds.

Between 2001 and 2009, more than 16,100 children ages 14 and younger visited the emergency room because they were choking on hard candy, the study found.  Overall, nearly 112,000 children visited the emergency department for nonfatal choking related to food during the eight-year study, about 12,400 per year. That means that about 15 percent of all child emergency room visits related to choking on food were due to hard candy.

Other top foods that sent kids to the emergency room include the following:

The majority of children who came to the emergency room because they were choking on food were treated and released, but about 10 percent needed to be hospitalized. Kids who choked on hot dogs or seeds, nuts or shells were more likely to require hospitalization than those who choked on other foods.

The average age of kids treated for nonlethal food choking was about 4.5 years old, and more than half were boys.

The researchers, from Nationwide Children's Hospital in Columbus, Ohio, analyzed information from a national database of emergency-department visits, focusing on choking visits involving food that did not result in death.

Young children may lack the teeth necessary to properly grind food, they still may be learning how to chew and they may have a high activity level, which may make them more likely to choke on food, the researchers said.

Foods that may pose a greater choking risk to children include those that are similar in shape to the child's airway (such as hot dogs), those that are difficult to chew (raw fruits and vegetables) or those that are consumed by the handful (such as seeds and nuts), which may be too much for a child to chew, the researchers said.

The American Academy of Pediatrics (AAP) recommends that children ages 5 and younger should not be given hard candies or gum, and that raw fruits and vegetables be cut into small pieces when they are fed to young children.

Children should be supervised while eating, and should never run, walk, play or lie down with food in their mouth, the AAP says. Parents and caregivers should be familiar with techniques to rescue their children if choking does occur.

The AAP also recommends that the Food and Drug Administration take action to label foods that may pose a choking risk to children.

The study is published today (July 29) in the journal Pediatrics.