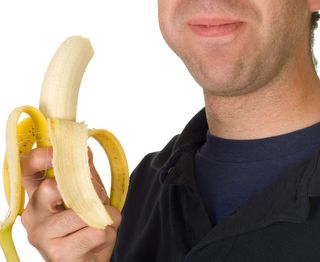 "I love bananas. Why do they make me gag?"

Whether it's bananas, mashed potatoes, yogurt or pulpy juice at issue, queries about the gag-inducing effects of soft food appear on countless Q&A websites, with nary an answer to be found. Ten percent to 15 percent of adults regularly gag while eating perfectly edible food —  often sticky stuff, like bananas — and only some stop to consider the weirdness of it.

For others, the problem transcends weird. Many "picky eaters" have actually been forced into their state of malnourishment by the fact that almost everything they put in their mouths (except, say, their beloved chicken nuggets) triggers their gag reflex. Some kids gag so easily they're in danger of starving to death.

Now, scientists have finally pieced together the explanation for this rampant gagging. Better yet, they have stumbled upon a simple fix that exploits a strange neural connection between the back of our mouths and the palms of our hands.

Aside from preventing choking, the human gag reflex serves a vital purpose during infancy: It helps moderate the transition from liquid to solid foods, said Donna Scarborough, a professor of speech pathology at Miami University of Ohio and a leading expert on gagging problems. "If you give a 4- or 5-month-old some puree that isn't thin enough, they start gagging, and that's normal for them," Scarborough said — normal, because they can't yet digest chunks. When everything goes as planned, the reflex gradually gives way, allowing most chunky bits down our gullets by the 9-month mark. [5 Incredible Baby Skills]

However, in a sizable minority of people, this letting go doesn't happen properly. "The worst I've seen is when I touched a kid's leg and he gagged," Scarborough told Life's Little Mysteries. More often, children and adults with a "hypersensitive gag reflex" react to the texture of thick and sticky foods such as bananas and mashed potatoes. "We don't know the neurologic underpinnings of this, but I think you get more nerve endings that are fired in response to sticky food, and it often takes more than one swallow to clear it off the throat and tongue," she said. This difficulty clearing food from your mouth harkens back to the hard times you had as a 4- or 5-month-old, and suddenly, there you go a-gagging.

But why does your brain still think you're a choking baby? It could be any of the following reasons. First, if your mom or dad gags, you might be genetically gag-prone, too. Second, many extreme gaggers experienced some sort of food trauma at a young age (such as choking or severe diarrhea) that sent their brains into a state of permanent vigilance, especially with regard to foods textured similarly to whatever caused the incident.

Lastly, many gaggers' parents missed the window for when to introduce chunky food. "Kids who are introduced to solid foods after 7 months of age are more likely to have problems with gagging," Scarborough said. "Your gut can't absorb nutrients from larger food molecules until 4 to 6 months, so you really shouldn't introduce solid food before then, but if you wait until 7 months, you've missed the window."

It's an open question why the window for something so vital — a lifetime of gag-free dining — would be so narrow. [What If I Only Ate One Type of Food?]

How not to gag

While working with kids who have gagging problems, Scarborough noticed that children's gag reflexes diminished when she held their hands. She eventually discovered why. "I found a pressure point on the hand that causes the gag reflex to move back in the mouth," she said. When 2 pounds of pressure are applied to a point in the dead center of the right or left palm, the gag reflex recedes.

"I've gagged more than 160 adults," Scarborough said, "and the pressure point has worked on everybody." Although she's still looking into it, she suspects the wiring of the palm to a point in the brain stem that controls the gag reflex is no mere accident. Newborns have a "grasp reflex" that induces their fingers to curl into a fist when their palms are stroked. It could be that the pressure from all that grasping gradually suppresses the gag reflex. Ideally, the suppression should coincide with the introduction of solid foods; waiting too long to start the latter (i.e. after the 7-month mark) might throw off the process.

It's never too late to get back on track, however. Next time you eat a banana, try applying pressure to the center of your palm. Scarborough, along with Michael Bailey-Van Kuren, a mechanical engineer at Miami University of Ohio, have patented a glovelike device that does the job mechanically. You might soon encounter the device in one of the most gag-inducing places on Earth: your dentist's office.