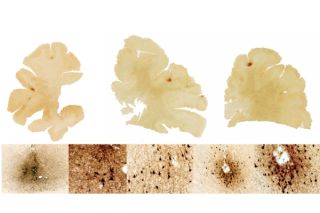 Neurodegeneration, the brain gradually losing neuronal activity in its motor, sensory or cognitive systems, typically results from genetic mutations or an abnormal (toxic) accumulation of certain proteins within the neurons. Chronic Traumatic Encephalopathy — along with Huntington's, Alzheimer's and Parkinson's — is a neurodegenerative disease associated with a damaging buildup of proteins.

Traumatic brain injury or concussions occur when the head sustains a blunt and powerful force. Though typically it is not the impact or bruising that causes the neurotrauma. It is the rapid motion of the head. When the head is spun violently or sent into a state of rapid acceleration followed by an abrupt stop, brain neuron functions are disrupted. In CTE, this disruption has caused “Tau” proteins — structures commonly found in neurons — to progressively amass to toxic levels and form tangled structures within the brain. As a result, electrical signaling between neurons is diminished and the brain's ability to process and retain information becomes increasingly impaired. Emotional disorders such as dementia and depression may also ensue.

Historically, research on TBI and CTE has focused on amateur and professional athletes. Initially diagnosed in boxers who had sustained multiple concussions in the ring, CTE is commonly associated with contact sports such as football, wrestling and ice hockey (in addition to boxing). Now, however, researchers are making a similar association between blast neurotrauma and CTE in U.S. military veterans who have served in Afghanistan and Iraq.

Similar patterns in soldiers and athletes

NSF-funded research published last month, “Chronic Traumatic Encephalopathy in Blast-Exposed Military Veterans and a Blast Neurotrauma Mouse Model” reveals the connection between CTE and soldiers exposed to improvised explosive devices. After conducting autopsies on military veterans who had sustained injuries from explosions or similar concussive events, Lee Goldstein and his associate Ann Mckee found patterns of CTE similar to those of amateur football players. They found tangles characteristic of tau proteins in both veteran and athlete brain tissue.

Seeking to better understand how explosives impact neurodegeneration, Goldstein's research group developed a blast neurotrauma model that mimics an explosive blast. They discovered that mice exposed to a single blast developed not only the brain pathology of CTE, but also the symptoms. The mouse brain tissues samples showed hyperphosphorylated tau proteins as well as signs of axon degeneration.

In normal phosphorylation, phosphorous is added to a protein to control its activity, essentially telling the protein to turn on or off. In the case of CTE, the process is disrupted and the protein undergoes chemical changes. Tau proteins build up and cluster in tangles. The tau proteins' erratic behavior can damage axons, also known as nerve fibers, which carry electrical signals from the neuron to locations throughout the nervous system.

To properly function and regenerate, the axons require the assistance of tiny building blocks called microtubules. The tau protein stabilizes these microtubules. If defective or unstable, the microtubules can't support the axon's ability to transmit signals. Brain functions such as memory and learning become impaired. In some cases, the region of the brain effecting emotion can also be compromised. In the experiments Goldstein and his colleagues conducted, mice exposed to explosive blasts showed learning and memory deficits within weeks of the test as a result of the damage to their nerve cells.

The research findings have immediate applications on both the battlefield and in the sports arena. They validate an important connection between violent movement of the head during a blast shockwave and the concussive power of a tackle on the field. It is this rapid and damaging movement of the head that can lead to neurodegenerative diseases such as CTE. If the movement of the head can be controlled during a shockwave or blitz, the disruption to the nerve cells can be minimized.

Dr. Goldstein and his research team found that mice whose heads were immobilized during blast exposure did not develop the symptoms or pathology of CTE. This finding has significant implications for the development and testing of protective military and sports equipment. In addition, cases of long-term memory loss and learning deficiencies — even depression — in veterans and professional athletes can now be reexamined. Top officials in the Pentagon as well as members of congress and the President's senior science advisor are all reviewing this research with the intention of setting new guidelines for protective head gear.

Through funding from National Science Foundation, Goldstein and his collaborators Sudipta Seal and Hyoung-Jin Cho from University of Central Florida have developed and validated a biosensor that can identify oxidative stress (the earliest indicator in Alzheimer's and Parkinson's Diseases) on nerve cells. The scientists plan to explore the possibilities of using this biosensor to determine the extent of neurotrauma in blast victims and hopefully help shape new or enhanced medical treatments and therapies for these victims.