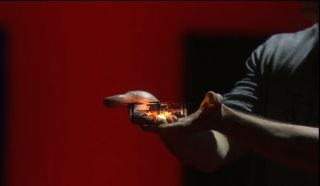 Researcher Rafaello D'Andrea demonstrates a tiny, twinkling drone that can fly in an intelligent swarm at a recent TED2016 conference.
(Image: © screenshot from TED 2016 video)

A swarm of dazzling drones lit up the sky and swirled around in a twinkling, orchestrated dance at a TED2016 conference in February.

The drones, which weigh no more than a slice of bread, were just part of a menagerie of futuristic flyers whose "aim is to push the boundary of what can be achieved with autonomous flight," Raffaello D'Andrea, a professor of dynamic systems and controls at ETH Zurich in Switzerland, said in his talk.

The new cadre of autonomous flyers are poised to take flight for inspection, environmental monitoring, journalism, photography and film, not to mention commercial package delivery, he said.  [9 Totally Cool Uses for Drones]

Miniature flyers have come a long way since remote-controlled toy helicopters of yesteryear. Tiny flyers now have the ability to run autonomously, sense their location and even respond to external disturbances. For instance, several years ago, a fleet of autonomous flyers built a 20-foot-tall (6 meters) wall using 1,500 bricks at the FRAC Center in France, D'Andrea said.  Other drones tethered by ropes were able to spontaneously build tensile structures, he said.

But behind all these functions is the ability to localize the objects in space. Historically, researchers have relied on external cameras (or, in the older days, remote control) to help position the drones in space. Now, however, D'Andrea and his colleagues at Verity Studios have built an internal localization technology that does away with this equirement.

"There are no external cameras, each flying machine uses onboard sensors to determine its location in space and onboard computation to determine what its actions should be," D'Andrea said. "The only external commands are high-level ones such as 'takeoff' and 'land.'"

The team has developed a fleet of strange flyers that completely redefine what a traditional plane should look like. For instance, their flattened tail sitter drones can fly forward and hover efficiently. Historically, one big gust of wind could completely disrupt traditional tail sitters. Using their new localization and stabilization technology, the team has developed tail sitters that can be thrown any which way and somehow recover their original position.

Another prototype, called the monospinner, aims to reduce the glitchiness associated with having many moving parts.

"Helicopters are affectionately known as machines with 1,000 moving parts, all conspiring to do you harm," D'Andrea said.

By contrast, the monospinner has just one moveable part, a propeller, yet can still fly almost anywhere in space.

Another flyer, called the omnicopter, is an exercise in redundancy. Each half wants to spin in opposite directions. That means that when assembled, omnicopter moves equally well in any direction.

The omnicopter is a move toward more reliable drones of the future, he said. If any part fails, whether it's a motor or a battery pack, or whether half of the drone is completely disabled, the handicapped omnicopter can still fly where it needs to go.

As the final exhibit, D'Andrea demonstrated a swarm of commercially available quadcopters outfitted with twinkling lights and the research team's localization technology. The swarm of about 20 drones took to the skies and circled around each other, twinkling on and off in a choreographed dance.

"Because each unit knows where it is in space and is self-controlled there is really no limit to their number," D'Andrea said.

Though the drones do have practical applications, that's not really the main draw for D'Andrea's work.

"It's a continual reminder of how magical and wonderful the universe is, that it allows creative, clever creatures to sculpt it in such spectacular ways. "The fact that this technology has such huge commercial and economic potential is just icing on the cake."