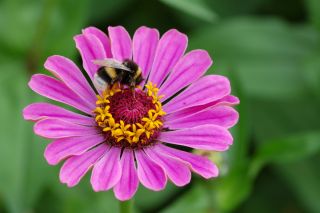 A team of scientists took a closer look at declining bee populations in the Netherlands and discovered something unexpected — it wasn't just the bee populations that were shrinking. The bees themselves were getting smaller.

Over nearly a century and a half, big-bodied female bee species in the Netherlands have reduced in size by about 7 percent, according to a new study, the first to investigate variations in Dutch bee size over time. The researchers suggest that reduced habitats and resources could be causing the change, putting evolutionary pressure on the bees to shrink.

Their investigation began several years earlier, with a study analyzing the main drivers of bee decline, which they linked to diminishing numbers in the bees' host plants. They found that if a plant species dwindled, the number of bees that depended on that plant would soon follow suit, and that populations of large-bodied bee species plummeted more rapidly than that of small-bodied bees. ['Heavy Metal' Bee Is a Headbanging Pollinator (Video)]

If food was becoming harder to find, it could be advantageous for big-bodied bees to gradually become smaller, the researchers speculated. To find out, they tracked size changes in Dutch bee species' recent past.

To do so, they measured 4,500 bees that had been gathered by entomologists in the Netherlands and were stored in museum collections, scrutinizing 18 bee species that pollinated multiple plant species, according to David Kleijn, the study's co-author and a professor of plant ecology and nature conservation at Wageningen University in the Netherlands.

"We had about 10 different genera of bees, with two to three different species in each genera, and we did that on purpose to get a representative sample of Dutch bee species," Kleijn told Live Science.

What they found was consistent across all the bees — large-bodied bee species were affected much more dramatically than small-bodied species. "If a bee species was large, it declined in size. If it was small, it didn't," Kleijn said. Less food availability for the bees due to increased human development and agriculture could be driving the change, the researchers suggested.

However, Kleijn added, they were surprised to see that the changes were restricted to female bees. He proposed that ecological pressures for bees to get smaller might be offset for male bees, because a bigger male is more likely to be successful when competing for mates.

A recent study found that the average man's height in the Netherlands increased about 10 percent over the past 130 years — "one of the most spectacular growth responses ever recorded for human populations," the researchers noted. According to Kleijn, this can be traced to dramatic upgrades in overall quality of life. [Taller, Fatter, Older: How Humans Have Changed in 100 Years]

"Living conditions of people 130 years ago were pretty appalling in terms of sanitation, food, diseases," he told Live Science. Conditions have improved for people significantly since then, but the reverse is true for bees — especially where food is concerned, Kleijn said, adding that further studies of bees and their habitats across Europe will help to identify what's behind the shrinkage.

"If we see the same pattern — decline in bee body size in intensely farmed areas, and not in areas with a lot of nature left — then that sort of confirms that it's related to land use change," Kleijn said.

The findings were published online Feb. 10 in the journal PLOS ONE.