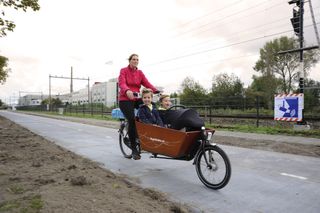 The SolaRoad bike path was officially opened on Nov. 12 at a ceremony in the Dutch suburb of Krommenie, to the north of Amsterdam.
(Image: © SolaRoad)

To capture more energy from the sun, one company is putting solar panels where they've never gone before: in the street.

This week, the Dutch company SolaRoad officially opened the world's first solar roadway in a suburb outside of Amsterdam. The 230-foot (70 meters) stretch of energy-absorbing concrete and glass will be used as a bicycle path for commuters, according to the company.

The concrete that makes up the bike path is embedded with crystalline silicon, the same material found in conventional solar cells. Two layers of safety glass surround the cells, allowing sunlight to shine on the silicon while keeping the material from getting trampled. Electricity created by the solar cells — reportedly enough to power two to three homes for a full year — will be filtered into the local power grid, according to SolaRoad. [Top 10 Emerging Environmental Technologies]

But the bike path wasn't installed just to provide a few local residents with electricity. It's part of a wider effort by SolaRoad, as well as local government agencies in the Netherlands, to find new ways to incorporate green energy into the country's existing infrastructure.

For the next three years, SolaRoad's bike path will serve as a test bed, an opportunity for the company to improve its product before moving into the next stage of development. SolaRoad will collect data from the road itself, as well as feedback from those who cycle over it, to determine if solar-paneled concrete could one day cover municipal roads or highways, according to SolaRoad.

In the future, such roads may power more than just a few homes. Such "green" roadways could create electricity to power the streetlights that run alongside the road, as well as traffic signals and even electric cars, company officials said in a statement.

But there are a few problems with the idea of roads embedded with solar panels. For one, the recently installed bike path is prone to being covered with dirt and debris. This type of "pollution" affects the amount of light that shines through to the solar panels. But just how much this dirt and grime will affect energy production is one of many questions the company is hoping to answer during the test phase.

Other countries are also embracing the idea of incorporating solar power into existing infrastructure. While no other solar roadways have popped up yet, the city of London installed 4,400 solar panels along the roof of an existing bridge over the River Thames in January 2014. And in the United States, a company called Solar Roadways collected more than $2 million from a recent crowdfunding campaign supporting a project to develop solar panel-covered paving stones. These are similar to the materials used by SolaRoad in the Netherlands.