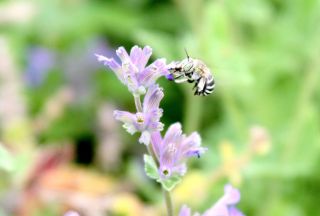 Australia's blue-banded bee is a successful pollinator because it uses its head — literally, scientists have found.

Like a heavy-metal fan headbanging to Iron Maiden, this species of blue-banded bee (Amegilla murrayensis) vibrates its head rapidly when visiting flowers. This turns out to be quite an effective method for distributing pollen, the researchers found.

As the bee's common name suggests, its abdomen is banded by metallic blue stripes, strikingly different from the yellow and black stripes usually found on honeybees. Native to Australia, blue-banded bees are solitary, with females building individual burrows in soil or clay. [Video: Headbanging Bee Puts Metal Heads to Shame]

Blue-banded bees, like many other bee species, are known as "buzz-pollinators." To pollinate a flower, these bees were thought to use their mandibles to grasp the part of the stamen that contains the pollen, and shake the pollen loose by vibrating their flight muscles. This type of pollination is necessary for plants that hold their pollen in a capsule, such as tomato plants.

When the scientists listened to audio recordings of the bees, they found that A. murrayensis buzzed at higher frequencies than the bumblebees. They also noticed that the blue-banded bee spent less time at every flower than the bumblebee, and typically visited each flower only once.

But the most telling difference was revealed on video: nine clips of pollinating bees recorded at 2,000 frames per second. Instead of clutching the flower's stamen and shaking it to release the pollen, A. murrayensis was doing something completely unique. The bee would rapidly "bang" its head against the pollen cone at a very high rate of speed, calculated by the scientists to be 350 times per second.

The scientists were "absolutely surprised," study co-author Sridhar Ravi, a research fellow at the School of Aerospace, Mechanical, and Manufacturing Engineering at RMIT University in Australia, said in a statement. None of them had ever observed this type of behavior before. "This is something totally new," Ravi said.

There were clear benefits to this unusual approach, the researchers reported. The higher frequency of the headbanging vibration would not only work well to break up clumps of wet pollen, but could also dislodge more pollen overall, which would explain why the bees' flower visits were shorter, and why they only visited once.

According to a statement by study co-author Katja Hogendoorn, a bee specialist with the School of Agriculture, Food and Wine at the University of Adelaide, previous research had already demonstrated that the blue-banded bees were effective pollinators. Now, knowing that they needed less time per flower suggests that the headbanging bees would also be very efficient pollinators, Hogendoorn said.

The findings were published online Dec. 1 in the journal Arthropod-Plant Interactions.